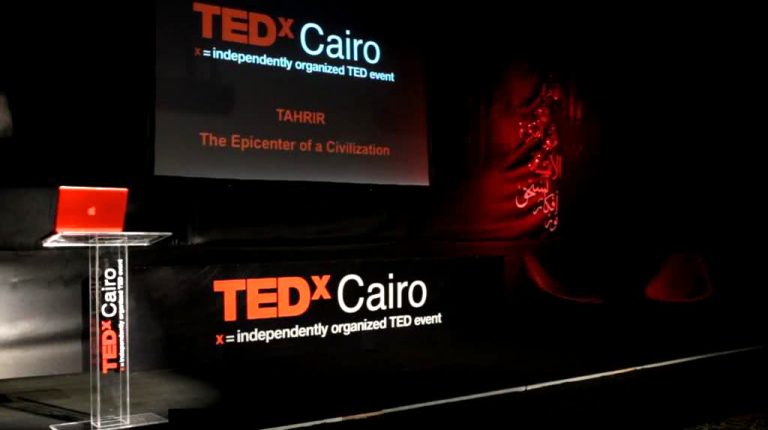 The speaker appeared in the video published on social media while speaking at a human development session, shouting at an audience on how they should not waste their life complaining and should take action. He was mostly repeating the same sentences, yelling at the audience to convince them to be more positive.

Mohamed has a company called UNIWAY, believed to be a pyramid scheme, that sells products with the aim of “making a positive impact in the lives of people through guiding them to become successful and influential” in both their professional and personal lives.

The video stirred controversy among Facebook users, who questioned how he claims to be “the most positive man” in Egypt and the Middle East. The users further doubted the honesty of such speakers.

Mohamed is not the only young person to take up human development as a profession to gain money and fame.  The profession of motivational speakers has been growing greatly over the past few years. It began with people posting short videos on social media platforms giving advice to others about relationships and other personal topics.

After a while, those individuals reached significant fame, giving sessions in halls at fancy hotels with expensive tickets, with dozens attending these sessions. The appearance of those “activists” was odd for the public, as it was not clear how they can obtain the knowledge or the experience to be able to give human development speeches to the public.

Many youth have started to take human development workshops as a job, in which their duties are limited to responding to complaints and giving sessions about being positive.

Most of the influencers are following the path of Ibrahim El-Fekki, who is a writer and author of more than fifty books, tapes, and videos. He was also a worldwide lecturer who trained more than 1 million people over 30 years in more than 33 countries in the French, English, and Arabic languages. His publications varied among topics of humanity, self-power, success, and building personality.

Among the famous motivational speakers, who has more than 500,000 worldwide followers on social media, is Kareem Ismail. Dozens of Egyptian youth attend his sessions.

A dentist, who only wanted to be identified only as SH, said, “I know Kareem Ismail personally, he is a great person. His speeches always boost me, give hope, and change my mood. However, I never got the time to attend any of his sessions. “

Salma Nossier, 24, said that she previously attended one of these sessions, because she was really inspired by one of those speakers, but she paid EGP 70, which was really over her budget. “The only thing I regret is why I should pay this amount to hear discussions available online.”

Daily News Egypt spoke to a number of social media users on what they think about motivational speakers, if they are really positively impacting the public, or if they are just exploiting the “profession” to become rich and famous.

Opinions of people varied between those supporting their speeches, explaining that people really need to be reminded every now and then that they have to follow certain steps to be successful and have to be surrounded by positive individuals. Meanwhile, others saw that such speakers are not real influencers, but are promoting illusions and are giving speeches that have no long term impact and are fraudulent.

Teaching assistant at a private university Mohamed Hossam, 27, said, “I believe motivational speakers are exploiting the pain and frustrations of people by giving speeches that can stir their feelings and attract them. We can tell that some are qualified in helping people who are suffering serious issues, but in general, why should I go to hear someone telling me ‘work hard or focus in your life,’ these are basics, and most of those speakers are tackling these normal topics.”

Nariman El-Gabry, 22, a marketing officer, said, “I don’t think they are exactly swindlers, but their influence is so instantaneous that after one leaves the hall, they return back to their normal, disappointing state. So, I strongly believe that being a motivational speaker is, frankly, a useless job, which is something that should not be a job in the first place.”

Yasmine Amer, 20, agreed with El-Gabry saying, “I don’t believe they are real influencers, as once you end the video or exit the hall, you will be influenced for a few minutes that you should change your life by achieving more, but that will last for a day at most, because the real change comes form within persons themselves.”

“My own humble view is that TEDx speakers are mainly the best out there, with real messages of change. However, on other platforms, there are also good ones and bad bad ones. It is also important to mind the fact that what we view as disturbing and ‘conmen’ could have a very positive influence on others. So generally, I am not against them,” he said.

Robeen Fayed, a graphic designer, said, “all they do is talk about their personal experiences. Personally, I’ve never felt like I want to listen to any of them. If I want to get motivated, I would find other ways to do that such as read books, watch movies, meet new people, travel, do anything else rather then hearing those people. I don’t find it motivating to hear a person speak for hours about their experiences or people they know.”

Moreover, a 28-year-old who only wanted to be identified as MA, said, “it’s just business. I knew friends who took courses and trainings and then became trainers themselves. I do not know if people can benefit from or need this type of life coaching, but I feel it’s just a way to earn a living.”

Nada Gaber, a real state employee, said, “I never understood what are the characteristics that make so-called motivational speakers and allow them to give advice to people. Also, all they say is commonly known. I feel like they are just repeating quotes published on Google about being positive. This not art or a proper profession to pay for. I strongly believe that this is a form of fraud.”