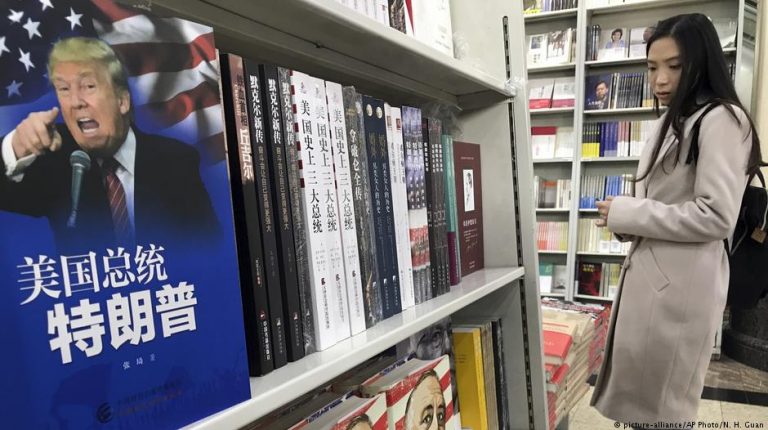 One year after Donald Trump’s inauguration, US trading partners in Europe and Asia are largely in agreement that it could have been much worse. But what is going to happen in the smoldering trade dispute with China?During the election campaign, Donald Trump denounced China as an unfair trading partner, accusing the country of currency manipulation and “the GREATEST JOBS THEFT in the History of the World.”

China has taken center stage in more than 200 Trump tweets, according to ABC News. And in most of them Trump threw the Chinese under a bus. Even back in 2012 during the Summer Olympics in London, when Chinese athletes were faced with doping charges, Trump tweeted: “No surprise that China was caught cheating in the Olympics. That’s the Chinese M.O. [Modus Operandi] — Lie, Cheat & Steal in all international dealings.”

Read more: China trade surplus drops, but not with the US

Again and again, Trump has announced a tougher stance on China. But what has he actually done so far? “Relatively little,” according to political scientist Thomas Jäger from the University of Cologne. “And the answers to the question of ‘why?’ differ widely. Some argue that Trump was surprised by the conflict in North Korea and has therefore postponed his policy of economically attacking China, while others say the reason is simply that the relevant positions within government agencies are not yet filled.”

Calm before the storm?

The first real movement only started in August when Trump officially advised US Trade Representative Robert Lighthizer to investigate whether China was violating American interests through unfair trade practices, such as China’s handling of American intellectual property rights. For their part, the Chinese were annoyed and warned against a trade war.

For Jäger, this investigation by Washington alone is not yet earth-shattering. “The fact that this mandate exists is not so unusual. The question will be how these results will be put into practice politically.”

The issue is not whether to accuse China of unfair trade practices, since the US administration is already quite unanimous in its condemnation. “What matters is whether this will be used as a reason to change the policy toward China.”

For a number of conservative think tanks in Washington, China is the biggest challenger to American greatness. Their horror scenario is a China that is economically and geopolitically triumphant over the US.

“They compare China to Germany in the 1930s and their argument is that if we do not face up to this challenge now, it will eventually be too late and China will be too strong for us to really settle this conflict,” according to Jäger.

But in relation to China, major disillusionment set in a long time ago says Christopher Balding. “For many many years there was this expectation that Chinese markets would continue to liberalize by themselves,” explains the American economist, who teaches at Peking University’s HSBC Business School.

Yet that did not happen. On the contrary the Chinese government “has become increasingly protectionist in its markets.” Trump simply decided to stand in opposition. Nevertheless, Balding says, “with the exception of the aluminum market and steel market, the US market is still wide open for Chinese companies. This is true of trade. This is true of investment.”

That Trump is standing up against protectionism in the Chinese market is justified, since the Chinese authorities have not been complying with their legal obligations, criticizes Balding. The government in Beijing is working with double standards, since foreign investors in China are being given a hard time, while the Chinese are calling for free access to the US market.

And in the end, Chinese acquisitions of US firms are “not treated any worse than in other countries. And in fact there are other countries … that have more acquisitions rejected by the Committee on Foreign Investment in the United States,” says Balding. The Chinese have little room to complain.

Jäger is convinced that currently the so-called “Goldman Sachs Group” in the administration has the upper hand. “From Gary Cohn at the White House, Steven Mnuchin at the Treasury to Wilbur Ross at the Commerce Department. These are all people who want to continue a cooperative policy toward China.” Because the Wall Street lobby in Washington knows very well that businesses can only earn more money in China if an open confrontation with Beijing is avoided.

Political backing for a tougher course

Political support for tightening the screws on China should be the responsibility of the US president, says Balding. He believes that there is broad support from Democrats and Republicans. But in business circles it is a different story. “The American business community doesn’t want a trade war. The Chinese business community doesn’t want a trade war. There are too many people in both countries that it’s simply not beneficial to.” However, he also believes that Beijing’s honeymoon is coming to an end: “I do think you will see a period of elevated trade tensions for sure.”

These developments are also being closely watched in China. Although Beijing attaches great importance to good relations with the US, and even gave Trump a state visit, Shi Yinhong of the Beijing-based Renmin University of China says that it was Trump who branded China as a rival power shortly after his visit to Beijing.

Trump’s China strategy is “very simple and very bad,” summed up Shi, while also referring to the assessment of think tanks in Washington that are close to the government and expect that the US will impose trade sanctions against China in the first half of 2018.

US Department of Commerce recommends imposing 53% tariff on steel imports from Egypt, 11 other countries