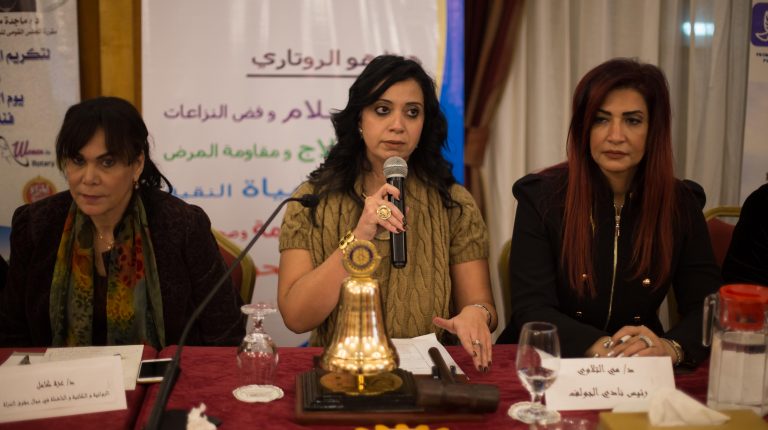 Rotary Club, in cooperation with National Council for Women (NCW) honoured a number of highly qualified female leaders in different fields, whether in their professional fields or in the area of development.

The honouring came during the joint meeting of Rotary clubs and in appreciation to women’s achievements in their respective fields,

nominated by the presidents of different Rotary branches.

Soheir Saad Koraa, Rotary Club president of Horus Heliopolis branch and professor at the Egyptian Atomic Energy Authority (EAEA), said that the criteria for choosing the honoured women is being professional and highly qualified in their specialisation.

She added that Rotary chose to honour all categories of women leaders in different fields at all levels, avoiding to limit the honouring to Rotary members only, as the club believes that every woman is a leader in her place.

Moreover, Koraa said that the reason why Rotary chose to honour women leaders in Ministry of Environment is that Rotary’s goals are in line with the projects and objectives of the ministry.

On another level, she added that “in my opinion, women in high social levels in Egypt do not suffer from discrimination or from losing their rights.”

Koraa explained that she visited two Rotary clubs in Vienna and that she was surprised that 100% of their members were men. Meanwhile, in Egypt, women have reached the position of club president.

On the other hand, she added that in her career, women in Egypt have become professors and heads of commissions, departments, and sections, while the number of women who are professors abroad is limited.

Among Rotary women leaders, Hanan Abd Elmonem was honoured. She is a former president of Rotary, East Heliopolis branch, general director of Human Resources Department at Middle East Oil Refinery (MIDOR), and a certified international trainer, who gives courses about the code of ethics for all employees in the petroleum sector.

Abd Elmonem graduated from the faculty of languages, then obtained a bachelor’s degree from Sorbonne, followed by a master’s degree in human resources from the American University in Cairo (AUC).

Abd Elmonem told Daily News Egypt that she started her career as a junior employee. Following a bad experience where her manager treated her badly, she knew what is meant by injustice in work that can kill success at an early stage.

She continued that when this stage was over, she decided to become a distinguished employee, to add to the community, and to brand herself.

“According to management science, women are best at negotiations, because they have the inclusion instinct,” Abd Elmonem said.

“So, in my opinion, the best place for women in the petroleum sector is in the human resources department, that’s why I decided to work in human resources,” Abd Elmonem continued.

Moreover, she added that women working in the petroleum sector may not achieve senior positions, even if they are highly qualified, pointing out that there are only two or three chairwomen for petroleum companies in Egypt.

Furthermore, Abd Elmonem said that she hopes to establish a human resources association for the petroleum sector, in order to have a reference and a unified system for the whole sector so that no one will be wronged.

On the other hand, she explained that working with Rotary added to her work, as she learned how to serve people with love.

She was able to match her work with Rotary work, explaining that success in social development gives her a push to work harder in her career and the reverse is also true.

Concerning her work with Rotary, she said that Rotary’s most notable projects were the elimination of illiteracy project across all Egypt’s governorates, providing roofs for 200 houses in Fayoum, Sohag, and Assiut, and medical convoys for the early detection of breast cancer for all women in Sharqia governorate.

Moreover, she said that Rotary aspires to plant 1.2m trees in Egypt during 2018.

Maysa Mohsen Bakr was among the honoured women. A member in Rotary club, Golf branch, she devoted her life to social development work, in addition to insurance.

Bakr is the only female member in the board of directors of the Egyptian Insurance Brokers Association (EIBA), member of the General Arab Insurance Federation (GAIF), thus representing Egypt in Arab and European countries.

She received many certificates and awards in insurance, including the best employee in Suez Canal Insurance Company for more than 12 years. She is currently a general comptroller which is the highest position in her career.

Bakr told Daily News Egypt that she graduated at the Faculty of Arts, Philosophy Department, then obtained her master’s. After that, she worked in insurance inside Egypt and abroad, as she worked in Muscat, Oman, gaining her insurance experience from specialists in the field there.

Moving back to Egypt, she continued her career, working at Suez Canal Insurance, which is the first private insurance company in Egypt.

Moreover, when she became a member in GAIF, her work involved much travelling, where she met the founders of EIBA, who recognised her work and efforts.

“When I nominated myself to become a member of EIBA, competition was very strong and there were some people who did not want me to join EIBA as I am a woman. Yet, most of the founders and the members welcomed my presence as they didn’t forget my work at GAIF and knew that I am hard worker,” she explained.

Bakr pointed out that she chose this career in insurance since it is the best kind of selling as you address people’s minds, explaining that you sell a non-materialistic product.

On the other hand, she said that females who work in the field of insurance have difficulty trying to prove every time they meet a new client that they are equally efficient to men and that they could provide suitable solutions for different situations.

Moreover, fierce competition is among the obstacles that women face in the insurance market.

Concerning her work in Rotary, Bakr said that she believes that working in development is not a luxury, but a necessity.

Moreover, she pointed out that she participated in many projects with Rotary, including installing drinking water systems, latrines, and roofing in more than 500 houses in Fayoum, as it is one of the poorest governorates.

In addition, literacy classes are a continuous project every year in Rotary.

Finally, she stressed that Rotary aspires in 2018 to complete its ongoing projects in a very short time and move on to the next projects in order to provide the necessary services needed to the areas that most require it.

Rotary honours a Rotarian for her efforts in illiteracy elimination project

Naglaa Nour Eldein was honoured in recognition of her efforts in Rotary’s literacy project. A member in Rotary club, Golf branch, she is a nutrition specialist by profession.

She holds a bachelor’s degree from the Faculty of Business Administration at the American University in Cairo (AUC).

Nour Eldein told Daily News Egypt that she joined Rotary in 2008, and since then has been in charge of the project for illiteracy elimination.

She added that she chose this kind of development as an educated person has the ability to help their country and themselves.

She said that after finishing classes, literacy programme participants receive a certificate equivalent to a primary school certificate.

“No one could imagine the happiness of literate people who have finished the classes. It is as if they received a PhD,” Nour Eldein continued.

She added that through her career, she brings about an added benefit to society as she organises awareness campaigns across Egypt about proper nutrition and its role in the prevention of many diseases.

“In my opinion, the most common problem that women face nowadays, is that they are not aware of their rights,” Nour Eldein added.

She said that she hopes that Rotary will reach and help disadvantaged people in every village in Egypt in 2018.

Taghreed Abd Elfattah, head of cardiology department at the Egyptian Railways Medical Centre was among the honourees.

Taghreed is not a Rotarian but she was nominated by Rotary members and presidents in recognition of her achievements in the medical field. Abd Elfattah won the “ideal doctor in Egypt” award from the Doctors’ Syndicate in 2010. Abd Elfattah is known for her medical outreach role as she holds workshops and scientific seminars across all governorates, to update people’s medical and scientific information and spread medical awareness among all people.

In this context, she told Daily News Egypt that women are the segment that benefits most from awareness campaigns. She explained her observation that female cardio patients always bear the pain and do not show it, because they are preoccupied with the responsibilities of their home and children. So they head to the doctor at a late stage and always come in more difficult conditions due to the late detection of the disease.

On the other hand, she said that her honouring on that day pushed her to work more.

“Whatever Rotary may mean to us, or to the world, it will be defined by the results it achieves,” Rotary’s founder Paul Harris

Rotary is an international service organisation that started in 1905 by Paul Harris in Chicago and that currently includes 1.2 million members in 30,000 clubs located in 166 countries. Rotary clubs exist to improve communities locally and around the world. They work to advance international understanding by partnering with Rotary clubs in other countries.

Their mission is to improve communities through a range of humanitarian, intercultural, and educational activities.

The name ‘Rotary’ originated from the group’s early practice of rotating meetings among the offices of its members.

For first time in Egypt, UNICEF uses click-funding to seek higher donations for its campaign

The day of the vaccine

US ambassador: Egypt “needs much more” to complete democratic transition