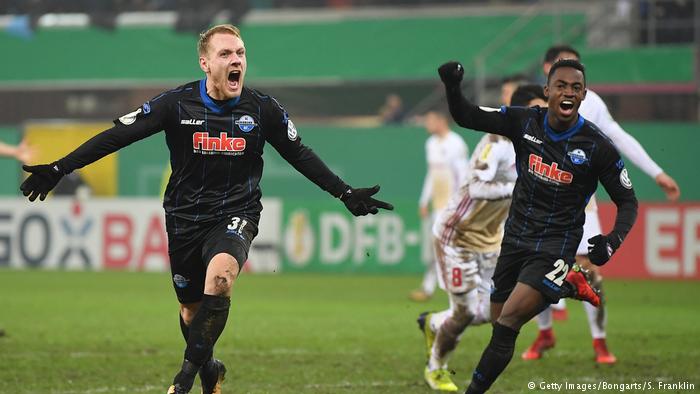 SC Paderborn claimed victory over a higher-division team for the third successive round of the German Cup. For a club that’s been through some tough times of late, Tuesday’s win over Ingolstadt was massive.A little over two years ago SC Paderborn were a Bundesliga club. Under the stewardship of talented young coach Andre Breitenreiter, the club were dining at the top table for the first time in their history.

But after relegation in 2014-15, they fell through the leagues during two seasons that also included the ill-fated reign of Germany great Stefan Effenberg, only avoiding relegation to the regional divisions last term thanks to the collapse of 1860 Munich. Which is why a hard-fought and fully deserved 1-0 win over second-division Ingolstadt was celebrated so vociferously by the 14,500 spectators in their sold out Benteler-Arena.

“This is indescribable, we have gone to our limits and been rewarded for it,” said midfielder Robin Krausse after the final whistle had blown and Ben Zolinski’s second-half strike had proved enough .

As big a win as this was, it qualifies as less of a surprise than first meets the eye. Despite their struggles in the last few years, Paderborn, now coached by former Bundesliga journeyman Steffen Baumgart, are sitting in the second automatic promotion spot in the 3.Liga with an eight point gap to the playoff spot. Plus, they’ve already knocked out second tier St. Pauli and Bochum in the cup this year.

They also have a 15-0 win to their name in knockout football this term, in the Westphalia Cup. Though the fact that they’re entered in to a state cup at all demonstrates their lowly status right now.

Their brush with obscurity seems to have revitalised a club whose previous biggest Cup upset – a 4-2 win over Hamburg in the 2004-055 German Cup – was tainted when it emerged that the referee had taken money from Croatian gambling groups to fix the match.

With plenty of Germany’s big guns set to be in the hat, Baumgart and his charges will be hoping to make an even more positive impression in the last eight this year.

Seaduction: the irresistible temptation of signature dining by the sea