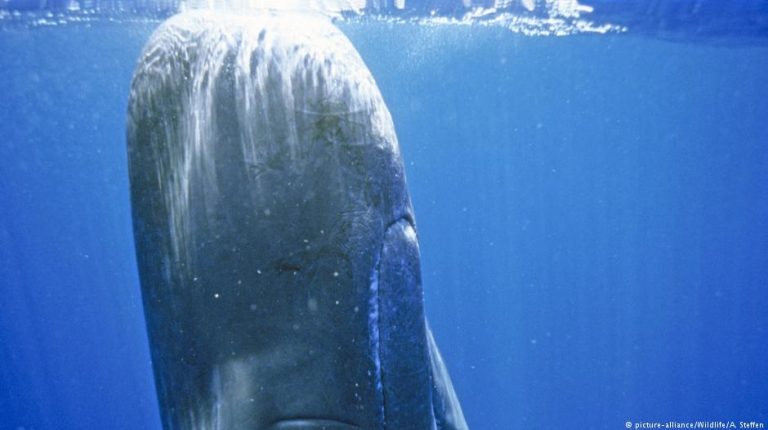 Falling asleep in a bathtub appears to be a very bad idea for humans. Simply, because we can’t breath under water. But what about whales and other marine mammals – why don’t they drown?It must be a slightly surreal sight. Imagine being a diver and coming across a group of sperm whales, not swimming but floating upright and motionless in the open sea. If you ever see such a scene, congrats, you have found cetaceans sleeping. It’s a rare occurrence, but occasionally pictures of such discoveries are published (see above).

There are even researchers working on the subject on different species of marine mammals – both in the wild or in captivity. The results of both approaches allow an impression of how sleep works in a whale’s world.

Back in 2008, a team of scientists from Scotland and Japan literally bumped into a group of sperm whales drifting vertically close to the surface of the water. The mammals were so immersed in a state called “drift diving” that they didn’t even respond to the presence of the passing boat. By observing the whales, the researchers onboard found they spend just seven percent of their day napping, for bursts of around ten to 15 minutes each time.

Such modest slumber make sperm whales the species least needy of sleep on the planet, dethroning giraffes who spend some eight percent of their day in slumber. Humans would likely not be able to live like that. When we sleep, we do so for several hours in a row. The reason is that we are involuntary breathers, which means we can count on our ability to breathe automatically.

Whales, on the other hand, have to think about every breath they take. Scientists believe they sleep with one eye open and one half of their brain awake, not only to control their breathing but also to ensure they can avoid predators, maintain social contact or continue swimming. The phenomenon is called unihemispheric slow-wave sleep and has also been recorded in whales living in captivity.

The ability of different species of cetaceans to hold their breath varies between a few minutes and over an hour. Their sleeping habits are also non-standard.

Humpback whales, for example, have been found resting motionless on the surface of the water for about 30 minutes. They can’t stay like that for long though, because they lose too much body temperature when inactive. By contrast, dolphins sleep at night for a couple hours at a time. Electroencephalogram (EEG) readings on bottlenose dolphins have shown the mammals to spend an average of 33.4 percent of their day asleep.

Researching a huge humpback or a sperm whale in the same way is an unlikely scenario. It would mean having to develop an EEG setup big enough (and a cooperative whale) to record electrical activity of the brain. In the meantime, science will have to continue to rely on discoveries to better understand how whales sleep.