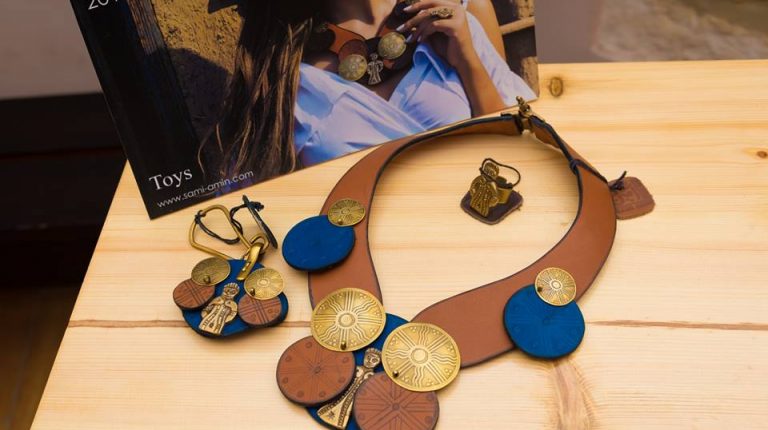 While the unforgettable lyrics of El-Leila El-Kebera play, boosted from the surrounding music system, some stood closely to watch the rotating installation while others reached out to interact with the showcased accessories.

In one corner of the shop, during the launch of Sami Amin’s most recent collection, “toys”, a statement necklace released percussions every time the brass clown reacted to applied pressure from visitors. Meanwhile, a bracelet attracted the attention with its rotating leather details and well-engraved doll.

Sami Amin has once again declared an early start to the upcoming year with his new collection. For 2018, the accessories designer dived back into his early years in order to announce childhood nostalgia the year’s top must have.

“The new collection is inspired by toys. Everyone fancies the idea of becoming a child once again. Who does not want to enjoy a day building sandcastles on the beach, or playing around innocently? Everyone has an inner child waiting to be unleashed at the nearest opportunity,” said Amin with a confident smile.

The theatrical collection interprets the designer’s appreciation of things he, as well as many local generations, grew up playing with. According to him, this collection aims to encourage innocent pleasure and happiness.

“Our heritage is rich with true Egyptian toys such as the Mouled doll and horse. These toys have a long history intertwined with our country’s legacy. The Mouled doll for instance originally dates back to the pharaohs; however, it was later updated to resemble Virgin Mary before it finally became associated with the prophet’s birth.” Amin added, “on the other hand, the horse originated from the infamous battle between Horus and the dark god. Therefore, our toys actually have significant input from the Egyptian history. Meanwhile, simpler toys such as the folkloric drums represent a rich reference for motifs.”

The designer, who is always keen on exploring new dimensions of the country’s well-known folklore and history was – to say the least – enchanted with all those that could dance, sing and move in order to cheer a child. According to him, his design process aimed to turn these everyday objects into a modern source of inspiration that could be moulded into a contemporary bag or necklace.

Much like his subject of interest, all of the designed accessories embrace mobility in their core as Amin made sure to borrow dynamic details from the world’s games and tricks. While he is well-known for his extended skills in the field of leather, his early start witnessed a stronger presence of brass.

“I used to incorporate metal in my designs; I have even designed few hybrid bags back in the days. However, later, I chose to focus on leather for quite some time.” Amin added “now that metal is becoming a major trend; especially when mixed with leather, I decided to go back to my old aesthetic.”

Even though this collection resembles a significant ode to Amin’s – currently known as – vintage work, it also features better manufacturing techniques and more innovative approaches that salute modern-day technology. One of the collection’s main starlets is a brass and leather shoulder bag. With intricate picturesque details, the show-stopping mini bag could already be named a best seller minutes into the launch event.

As a locally-celebrated ambassador of forgotten heritage, Amin also plans to extend his influence internationally. This collection is set to take Egypt’s toys all the way to Saudi Arabia and Australia.

“I can only hope that this collection would become a modern ambassador of our heritage. When you are proud of your country’s history, you manage to present it to the world in a modern method associated with high quality and genuine materials. This formula has the potential to make the foreign audience observe, respect and buy the product; carrying a part of the country to faraway destinations,” concluded Amin.