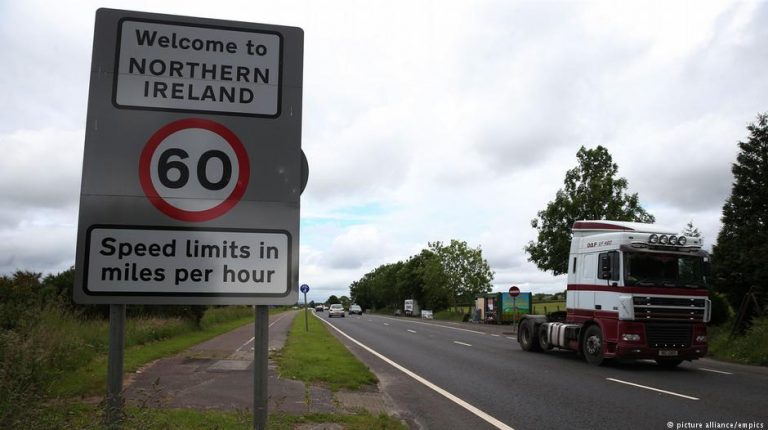 After a week of intense EU-UK negotiations over the ‘Irish question,’ white smoke came with news of an agreement on Friday morning. But what does all the diplomatic jargon actually mean?On Monday last, British Prime Minister Theresa May interrupted a crucial meeting with European Commission President Jean-Claude Juncker to speak for 30 minutes on the phone to the leader of a political party that had won less than one percent of the vote in the 2017 UK general election.

That phone call with Arlene Foster, the leader of Northern Ireland’s Democratic Unionist Party (DUP), dramatically torpedoed the expected announcement due to follow the May-Juncker meeting that ‘sufficient progress’ had been reached on the three key issues in the first phase of the EU-UK Brexit negotiations.

The final stumbling block was the prospective post-Brexit border arrangements between committed EU member Ireland and the UK’s Northern Ireland. This fiendishly complex issue had been largely ignored during the Brexit referendum campaign and in much of the post-referendum discourse.

Suddenly it had come to full boiling point and revealed itself to the wider European public for the central issue that it is. That elusive Irish border, for many beyond the island a merely confusing squiggle on a map, had come to life.

Read more: The Irish border — what you need to know

The DUP’s guiding principle is unionism — a firm belief that the political union of Northern Ireland and Britain must always be preserved to the fullest. That puts them starkly at odds with other Northern Irish parties such as Sinn Féin, which want Irish unification, rather than any form of political union with Britain.

As far as the DUP was concerned, the reports of aspects of Monday’s proposed EU-UK agreement threatened, on some level, the strength of that union. Given that the DUP’s 10 UK MPs currently prop up May’s Conservative government in a ‘confidence and supply’ arrangement in Westminster, Foster was in a position to stall the talks.

So ‘the Irish deal’ was pulled at the last minute. Yet just four days later, the deal, it seems, is done. On Friday morning, the European Commission, the UK government, the Irish government and indeed, the DUP, announced that the Brexit talks could progress to the next phase.

What changed in the space of four days? And what does today’s agreement mean in terms of the economic future of Northern Ireland and the UK as a whole?

Alignment you can believe in

The DUP’s issue on Monday was that the draft EU-UK agreement stated that the EU and the UK were committed to “continued regulatory alignment” on the island of Ireland after Brexit. It was a line they couldn’t stomach.

The precise meaning of “alignment” in this context is open to interpretation. At minimum, it refers to the preservation of various aspects of north-south co-operation as agreed in the 1998 Good Friday peace agreement while a wider interpretation could mean that it allows for Northern Ireland to remain, in effect, within the EU customs union and single market.

Yet despite the Monday crisis, that text is largely preserved, if not strengthened, in Friday’s document. It reads:

“In the absence of agreed solutions, the United Kingdom will maintain full alignment with those rules of the internal Market and the customs union which, now or in the future, support North-South cooperation, the all-island economy and the protection of the 1998 Agreement.”

But the commitment from both sides to maintaining the status quo at the Irish border is unmistakable.

One concession to the DUP added to Friday’s document is the line that states “the United Kingdom will ensure that no new regulatory barriers develop between Northern Ireland and the rest of the United Kingdom.”

Yet this part, aimed at assuaging unionist concerns over the potential for “a border in the Irish Sea”, has an addition of potentially major significance. It states that new regulatory barriers will not develop between Northern Ireland and the rest of the United Kingdom “unless, consistent with the 1998 Agreement, the Northern Ireland Executive and Assembly agree that distinct arrangements are appropriate for Northern Ireland.”

While the Northern Ireland executive — which is based on a power sharing arrangement between unionists and Irish nationalists —is currently not in place due to disputes between the DUP and Sinn Féin, that part of the agreement gives the executive the power to ultimately determine Northern Ireland’s own economic future, whether that be linked to Dublin and Brussels, or to London.

For even the most uninitiated observer on Irish matters, Friday’s agreement makes strikingly clear just how important the 1998 Good Friday agreement is to the ongoing Brexit negotiations.

At every turn, the EU-UK document makes clear that the essence of that agreement must be upheld, whether that be in terms of maintaining a frictionless border or in allowing Northern Irish citizens continue to have access to Irish citizenship (and EU citizenship, post Brexit) if they so choose.

It needs to be strongly stressed – this is merely a draft agreement on how, in theory, the rest of the negotiations should proceed. Anything is still possible in terms of Brexit, although Friday’s agreement strongly suggests there will be no regulatory divergence between Ireland and Northern Ireland, regardless of what happens in the wider EU-UK negotiations.

That represents a victory of sorts for the Irish government, who first campaigned for the Irish border issue to be given prominence within the Brexit negotiations and then for assurances to be given on “no hard border” before they could give the go-ahead for the talks to move onto phase two.

The DUP were also claiming a form of victory on Friday morning. In a statement, Foster claimed that Friday’s agreement ensured that Northern Ireland would leave the EU, the single market and the customs union along with the rest of the UK.

Yet, that statement also pointed to the uncertainty of precisely what arrangement Northern Ireland will have after Brexit. The DUP says more work is needed on the paper, namely on what areas of “alignment” there will be and on how any alignment can be put into place “without keeping Northern Ireland in the single market and customs union.” That is a key question indeed.

The political battles will continue of course, as will the debate over precisely what the detail in today’s document ultimately means.

But one thing appears to be clear for now — there will be no hard border in Ireland, soft Brexit, or hard Brexit.