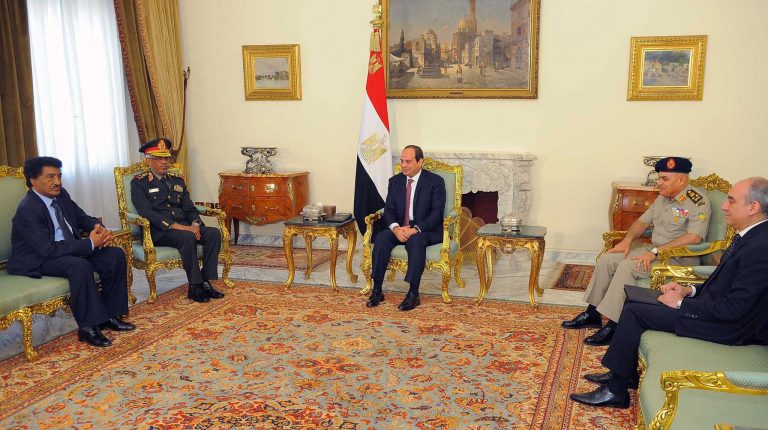 President Abdel Fattah Al-Sisi asserted Monday the necessity of working on boosting the bilateral relations between Egypt and Sudan. The president asserted to the Sudanese Minister of Defence General Awad Mohammed Ouf that any problems are not allowed to disturb the relation between the two brotherly countries, according to a presidency statement.

The Sudanese minister asserted his country’s keenness to boost relations with Egypt and to continue coordination and consultation between the two sides in order to deal with the various challenges facing both countries, the statement said.

According to the presidency spokesperson, Alaa Youssef, Ouf expressed his country’s appreciation of Egypt’s role in preserving the security of the Arab nation and boosting common Arab work, saying that Egypt’s security is part of Sudan’s—and that the whole Arab nation’s stability and security pivots on Egypt’s.

Ouf added that Sudan is looking forward to continue coordination between both countries’ ministers of defence in order to overcome any obstacles that could impact the good relations between the two countries, according to the statement.

The statement pointed out that Al-Sisi paid homage to Sudanese President Omar Al-Bashir. The president stressed that Egypt’s foreign policy is based on having strong relations with neighbouring countries—not conspiring against them—and on not intervening in the internal affairs of other nations.

Al-Sisi and Ouf also discussed raising the security and military coordination at the border between them.

On Sunday, Egypt’s Minister of Defence General Sedki Sobhi received his Sudanese counterpart in the Ministry of Defence in Cairo to discuss the latest updates in the national and regional scales and their impact on the stability and security in the region. The two ministers also discussed several issues of common interest.

Ministry of Irrigation reaffirms Ethiopia has not begun filling GERD

Shoukry, Ghandour chair third round of political consultations between Egypt and Sudan