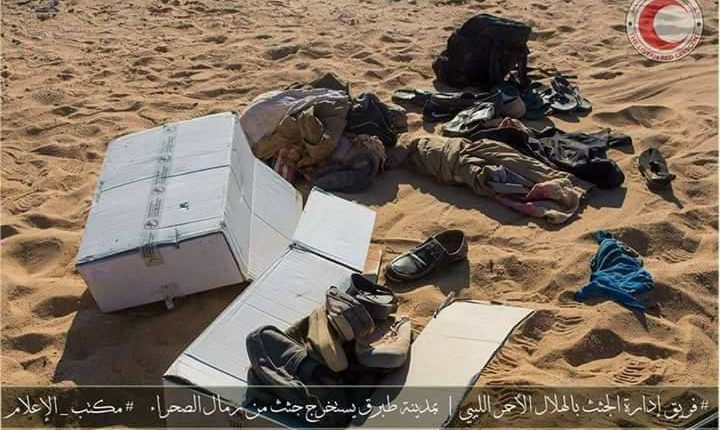 A few weeks ago, the bodies of Egyptians were found in the desert, amid the Libyan Red Crescent Organisation’s discovery of dozens of illegal immigrants’ bodies near Wadi Ali in the area of the Great Sand Sea on the Egyptian-Libyan borders.

They appear to have died of thirst and heat, media reports said. Their demise is yet another tragic destiny for immigrants coming from Egypt, which, however, doesn’t seem to work as a wakeup call either for those wishing to follow in their footsteps or for the Egyptian authorities.

The families of the recently deceased immigrants, whom Daily News Egypt contacted, all had relatives or friends living and working in Libya. This consequently makes Libya an appealing destination for them.

Mahmoud Abdallah lost a brother and a cousin in the recent event. He told Daily News Egypt that they were traveling with four other people, of whom only their neighbour survived. “They had proper documents, including official residence permits in Libya,” Abdallah claimed.

On 4 July, Abdullah received a phone call from his traveling neighbour telling him the sad news. According to him, his brother’s body would have been already buried by the neighbour when it was discovered by rescuers.

“He told me Egypt’s Foreign Affairs Ministry was contacted but didn’t’ respond,” Abdullah added. “I was told he starved to death. All I know is that he left the country after price hikes,” he said.

Saeed Farouk’s niece’s husband was also buried in Libya. “Smugglers take those who wish to travel to Libya to the borders with cars. They leave them there and tell them they would be picked up by someone else who would in turn drive them to Tobruk,” Farouk told Daily News Egypt.

Immigrants leave Egypt via Marsa Matrouh and are informed they will be illegally crossing the borders to Libya. “My relative and other people from my village have died somewhere between the two smugglers,” Farouk said.

“They fled out of starvation, and died out of thirst,” he added.

Families of the deceased said they were not contacted by either the ministries of immigration or foreign affairs regarding the transfer of their relatives’ bodies.

Local media reported that Mohamed Gebril, head of the investigations unit in the illegal immigration body in Tobruk, said that the bodies were taken to Tobruk Medical Centre.

Meanwhile, Egypt’s Foreign Affairs Ministry had claimed in a statement that it was following up on the situation through its embassy in Tripoli, which should be in charge of arranging the transfer of the bodies from Libya to Egypt.

But a Libyan Red Crescent official said that the Egyptian ministry was not following up with the procedures, according to Egypt’s local newspaper Al-Masry Al-Youm.

Egyptians’ insistence to travel to Libya despite deadly risks and the ministry’s repeated warnings against traveling there, the issue of illegal immigration still needs to be tackled in a deeper manner by concerned bodies.

Political analyst Tarek Fahmy told Daily News Egypt that the circumstances of the incident remain unverified, noting that the ministry is not the only body in charge of handling illegal immigration affairs.

In 2015, following the dramatic sinking of a boat off the coast of Rashid in Beheira governorate while heading to Europe, leaving more than 200 people dead, the Egyptian cabinet drafted a law combating illegal immigration, which was later approved by the parliament in 2016 as the parliament intensified its efforts to discuss the law.

Human Rights Watch (HRW) expressed support for several parts of the law, particularly because the law does not hold migrants or asylum seekers criminally accountable, and only criminalises the traffickers.

The law imposes tough penalties against traffickers or “brokers”, including harsh prison sentences and fines ranging from EGP 200,000 to EGP 500,000. It also labels migrants as victims, not criminals.

However, Samir Abo-Sayed, whose brother and nephew were victims of illegal immigration, told Daily News Egypt that the trafficker who helped them travel to Libya was not investigated by any authority, although their entire village knew who he was.

“We tried to meet him [smuggler] to understand what happened, but he refused to meet us,” Abo-Sayed said.

This comes as Fahmy argued that “securing the borders is no easy task.” He added, “Egyptian authorities exerted major efforts to secure its borders, but alone, they cannot put end to the flow of thousands of Egyptian immigrants.”

Dying in the process is not the only threat illegal immigrants have faced when heading to Libya. Kidnappings have also occurred.

Furthermore, Egyptians living in Libya have been deemed as potentially in danger since the beheading of 21 Coptic Egyptians by the Islamic State in February 2015, after which Egypt called on its citizens residing there to return.

Libya is an attractive destination for illegal immigrants, not only from Egypt, but from several other countries, due to its current situation of instability, Fahmy explained, adding that it is also a passage for immigrants to move to European countries as well due to its geographical position.

Thousands of migrants also attempt to reach Greece by land and sea. According to the UN High Commissioner for Refugees (UNHCR), 219,000 refugees and migrants crossed the Mediterranean in 2014.

In April 2015, Egypt hosted a meeting between officials of the European and African Unions aimed at the fight against illegal immigration and human trafficking.

Egyptian and European officials discussed on several occasions the coordination to combat illegal immigration; however, the Libyan borders remain an attractive route for immigrants.

IPO and earnings to watch in a week