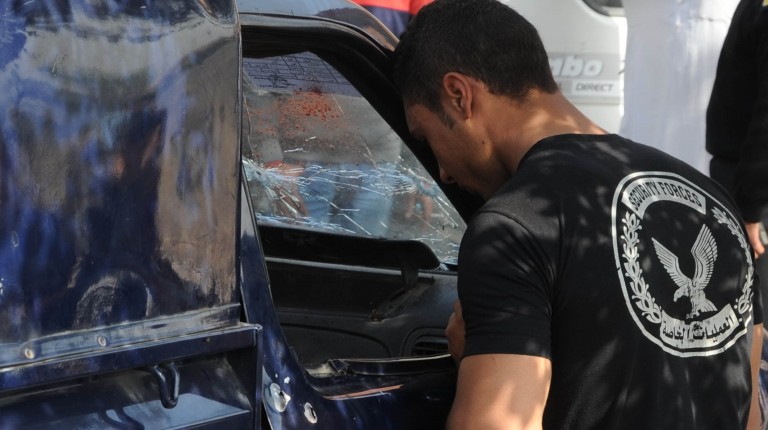 A police officer was killed and four conscripts were wounded after unidentified assailants in a Jeep shot the gas tank of central security forces near the Cairo suburb of Ma’adi early Sunday.

According to the statement issued by the Ministry of Interior, after initial examinations, the timeline shows that the terrorists shot the security vehicle after the forces had their suhoor meal. “At around 12.45am on Sunday, a vehicle of the central security forces transporting a group of officers and conscripts on the Autostrade Road was attacked by an explosive device planted on the side of the road,” the ministry said in its statement.

“The incident led to the martyrdom of first lieutenant Ali Abd Al-Khaliq and to the injury of an officer and three conscripts,” the statement read. The four injured policemen have been taken to hospital for treatment, the statement added.

No group has yet claimed its responsibility for the incident. Egypt is currently battling several armed groups concentrated mainly in the Sinai Peninsula, since the ouster of former president Mohamed Morsi in 2013.

Shootings that target police, army officers, and state officials have become a weekly occurrence in Egypt since July 2013.

Militant attacks have occurred mostly in North Sinai. Attacks targeting public facilities, police and army facilities and personnel have moved out of this region in the form of drive-by shootings or improvised explosive device (IED) attacks.

Ansar Beit al-Maqdis, the country’s most active armed group, has pledged its allegiance to the Islamic State group (IS), and has killed hundreds of soldiers and police officers.

The Hasm movement appeared in early 2016. In August, the group said it was behind the failed assassination attempt of former Grand Mufti Ali Gomaa. October of the same year, militants driving a black private vehicle opened fire on army leader, Adel Ragaai, assassinating him in front of his residence in Al-Obour City.

Lawsuit calls for stop screening a series for “insulting president”