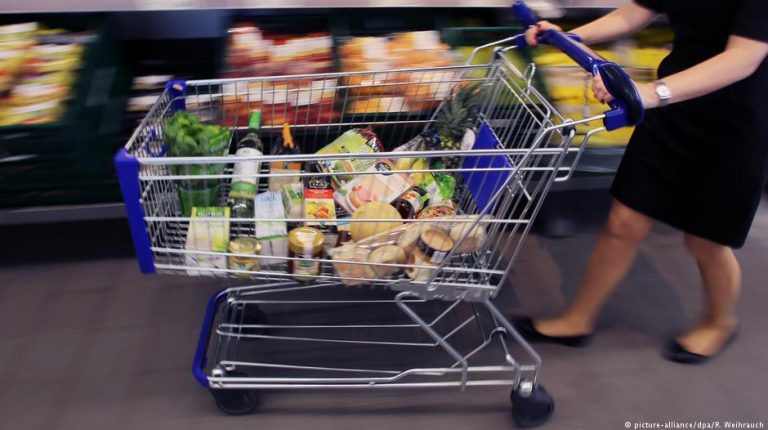 The Aldi bistro is set to tour several German cities – and if the idea catches on, some analysts think the retail giant could begin to compete aggressively over price with restaurants, as well as other supermarkets.

Germans enjoy some of the lowest-cost groceries in the world, according to government data. Budget supermarkets’ business models allow them to undercut other chains by 10 to 20 percent.

But scientists at the University of Augsberg warn that if the real costs associated with modern industrial agriculture were included, prices would be a lot higher.

Tobias Gaugler has studied the environmental impacts of nitrogen, used by farmers in various forms to achieve higher crop yields, in Germany.

“There is too much nitrogen both from the side of mineral fertilizers and manure in German agriculture, and this causes problems for the ecosystem and human health,” he told DW.

Prices would be 10 percent higher

“The worst is food that is produced conventionally from or by animal products … [which] should be about 10 percent higher priced than now,” Gaugler said.

Along with nitrogen pollution, industrial agriculture is responsible for air pollution and soil degradation, not to mention the impacts of antibiotics used on animals.

Campaigners are now putting pressure on the German government to insure that the hidden costs, such as filtering nitrates out of drinking water, are included in the final checkout price.

The European Union’s Common Agriculture Policy (CAP) is largely to blame for excess production, environmentalists believe, which also puts downward pressure on food prices. They are calling for reform.

CAP has been changed to assign a proportion of its payouts to climate-friendly farming. But some groups say this doesn’t go far enough.

Yet campaigners are skeptical about whether the dominance of low-cost grocery chains can be slowed, amid the chase for ever-greater profits.

Others are hopeful that the growing “slow food” market, which includes groceries produced locally by small-scale farmers, will see exponential growth.

Not all consumers seek out cheapest food

Cologne’s farmers’ market in the Rudolphplatz neighborhood does a brisk trade most days, and its customers are willing to pay a premium for produce with a lower environmental impact.

“It’s not that much more, just 15 to 20 euros per week,” said market regular Linda, who prefers to buy fruit and vegetables knowing they come from nearby farms.

Accusing supermarkets of selling “90 percent canned food,” another customer, Stefan, says he knows the market produce is “fresh” and the “quality is higher.”

Market stall farmers support the idea of narrowing the price difference between conventional and organic produce, as they understand the intense pressure farmers face from the discount chains to reduce prices.

“If [farmers] can get a better price, they will have the motivation to produce other vegetables,” market worker Adam Jay told DW.

He said farmers are being forced out of business by mass production, and that only the slow food movement can save many of them.

Gaugler, who authored the nitrogen report, says supermarkets shouldn’t take all the blame. He points out that in keeping food prices low, they’re responding to consumer demand and political pressure.

But he sees politicians as increasingly willing to adopt a “polluter-pays principle,” which would see food costs reflect more of the environment impact of producing them.

“There is a lot of lobbyism that hinders the system from changing, especially in the short-run,” Gaugler said. “But political drivers will be forced – especially by the Paris Agreement, and it is just a question of time [until] rules and regulations will follow.”

While that may not be great for Lidl and Aldi’s profits, it would do the environment the world of good.