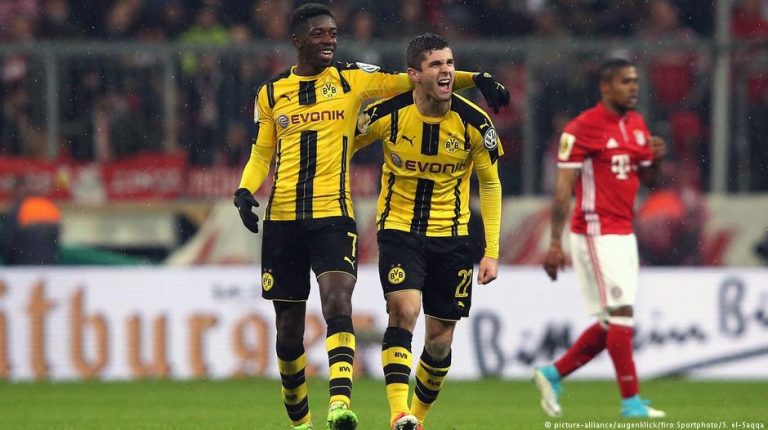 Ousmane Dembele and Christian Pulisic have expressed their gratitude to former coach Thomas Tuchel. French winger Dembele also claimed that he and his teammates were “forced to play” after April’s bus attack.After a tumultuous season, Borussia Dortmund youngsters Ousmane Dembele and Christian Pulisic have spoken out in support of former coach Thomas Tuchel in a series of separate interviews this week.

Tuchel parted company with the 2017 German Cup winners two years into a three-year deal after a series of public disputes with senior players and club management and was replaced by Dutchman Peter Bosz, but recent comments suggest he wasn’t completely without support in the Dortmund dressing room.

“I’m disappointed because Thomas was a coach who placed a lot of trust in me,” French starlet Dembele, 20, told German broadcaster Sky Sport News HD. “He’s a very good coach and I had some great moments with him. I don’t know what happened but I never heard anything about personal issues between people.”

United States international Pulisic, 18, echoed his teammate’s view when speaking at a marketing event in Denver, Colorado, this week. “I’m grateful for everything [Tuchel] did for me,” he said. “He always trusted me and he gave me a chance. In professional sport, it’s difficult when a coach leaves in this way, especially after a pretty good season.”

Indeed, as well as lifting the German Cup, Dortmund also achieved the season’s aim of automatic Champions League qualification and reached the quarterfinal of the Champions League, losing to eventual French champions Monaco. But it was clear in both games that the Dortmund players were in no fit mental state to play after their team bus was hit by three explosions hours ahead of the first leg, leaving Spanish defender Marc Bartra with an injured arm and the rest of the team in shock.

‘We were forced to play’

Nevertheless, Dortmund CEO Hans-Joachim Watzke agreed to UEFA’s request to postpone the match for less than 24 hours although coach Tuchel claimed publically that neither he nor the players had been consulted. The contradiction became the catalyst for a souring of the relationship between the two, with Dembele now claiming they were “forced to play.”

“In the days following the attack, I was just happy to still be alive. The atmosphere on the bus was scary but the next morning was a total catastrophe,” he said. “Nobody was in the right frame of mind to play the match. We discussed it among ourselves and many didn’t want to play – everybody in fact. But we couldn’t do anything about the decision. We were forced to play the game.”

Despite being perceived to lack empathy in some of his tactical decision-making, Tuchel’s public image was boosted in the wake of the attack as he appeared to defend his players and speak out against the cold UEFA decision-makers.

“The coach was completely behind us,” confirmed Dembele. “He had no appetite for a football match either. Everybody agreed but that’s how it was.”