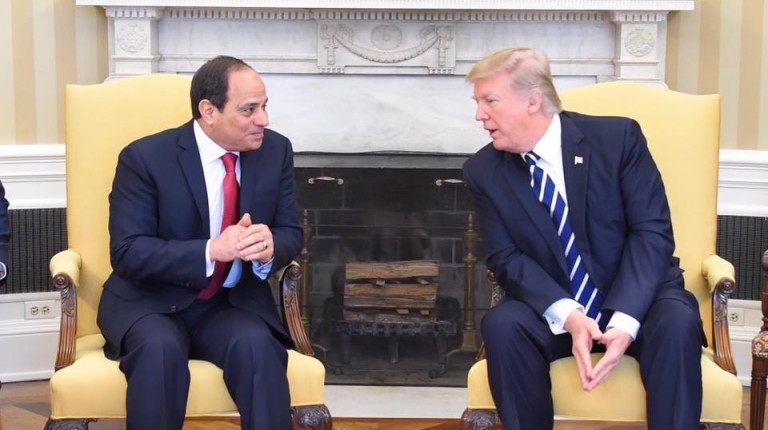 President Abdel Fattah Al-Sisi received a phone call from US president Donald Trump on Monday during which they agreed on meeting during the Arab-Islamic-American summit in Riyadh on 21 May, according to a presidency statement.

During the phone call, Trump said that he is looking forward to meet Al-Sisi during the conference and exchange views on the summit.

Trump expressed his intention to visit Egypt at the earliest opportunity to discuss ways of fighting terrorism in the Middle East. However, he did not mention a certain time for his visit to Egypt and did not clarify if he would attend a separate meeting with Al-Sisi on the sidelines of the summit.

Al-Sisi welcomed Trump’s desire to visit Egypt, as he has previously invited him during previous meetings and calls.

The two leaders further stressed on strategic relations between Egypt and the United States, as well as their keenness to further develop the partnership between the two countries in all fields.

Trump praised Egypt’s pivotal role in the Middle East and its efforts to counter terrorism and reinforce stability in the region. He also stressed the need to continue intensive coordination and consultation between the two countries on all issues of mutual interest.

Meanwhile, Al-Sisi asserted Egypt’s commitment to continue to strengthen relations between Egypt and the US and confirmed that he looks forward to meeting with Trump during the summit.

The US president is set to start his first foreign tour since his inauguration in January. It will start with the Kingdom of Saudi Arabia, then moving to Israel and Vatican City, and concluding the trip with a visit to Belgium.

Two days ago, the King of Saudi Arabia, Salman bin Abdulaziz Al-Saud, invited Al-Sisi to participate in the summit. Al-Sisi headed to the kingdom a few weeks ago during a Gulf tour to improve bilateral relations that had been strained for about a year.

Al-Sisi met Trump a month ago on his official visit to Washington, in which the US president asserted that he is a great friend and ally to Al-Sisi.

This was Al-Sisi’s first visit to the White House, as there had been tensions between the two countries during former president Barack Obama’s tenure, due to the latter’s critical stance regarding the ouster of elected brotherhood-affiliated president Mohamed Morsi and his criticism of human rights violations.

Cassation Court postpones the appeal of Morsi to 3 June

Egyptian and Saudi ministers of trade conclude meetings in Riyadh

US economic aid to Egypt to decline by $38m

Reform measures transform illusive system into a realistic one: Diab