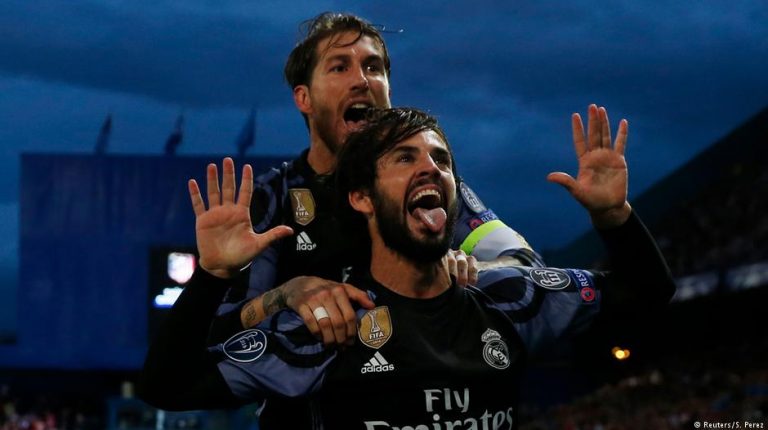 Real Madrid are on course to become the first side to retain the Champions League after booking a final date with Juventus, despite a 2-1 loss to Atletico. But it wasn’t all plain sailing, Atleti got off to a flyer.Atletico Madrid 2 – 1 Real Madrid (2 – 4 on aggregate)

It may not have been the way Atletico Madrid wanted to end their European nights at the Vicente Calderon but Diego Simeone’s men refused to go out with a whimper, even as they exited the Champions League to their city rivals for the fourth season in a row.

A close-range Isco effort at the end of the second half spoiled a sensational start from the hosts that featured two early goals and matched the fevered atmosphere at the stadium where Atleti have played since 1966.

Both sides had presentable chances in the first five minutes, with Atleti also having a penalty claim turned down, before the stadium erupted as Saul Niguez rose to meet a corner ahead of Atleti’s first leg nemesis Cristiano Ronaldo to power a header past Keylor Navas.

Confidence was surging through the men in red and white and just four minutes later it became genuine belief, when the referee pointed to the spot after Fernando Torres was fouled by Raphael Varane. Antoine Griezmann’s spot kick was poorly struck, the Frenchman slipping and striking the ball on to his standing foot, but just about floated over Navas’ outstretched hand.

As if they’d shocked themselves with such a frenzied opening, Atleti began to retreat, reverting to the controlled, disciplined football that’s built them such a fearsome reputation under Diego Simeone.

But it was all for nought as a dazzling piece of skill fit for the semifinal stage left them facing a mountain bigger than the one they’d started at the foot of. Surrounded by opponents, Karim Benzema swerved brilliantly down the left flank with the ball glued to his foot, just about keeping it in play before cutting back to Toni Kroos. Jan Oblak did well to scoop out the German’s low shot but Isco was there to clip in to the net and leave Atleti requiring another three goals.

To have any chance, the hosts needed to rediscover the intensity that had marked their opening to the first half in the second period but it proved a bridge too far. They huffed and puffed without creating a huge amount until the 66th minute when Navas was forced in to a double save, first from Yannick Carrasco’s shot and then from Kevin Gameiro’s follow-up header.

On the touchline, Simeone urged his players and fans on but even the Argentinian boss must have known his team’s race was run.

The rain poured down as the dying moments of the last derby at the Calderon petered out and Atleti were once again left licking wounds inflicted by their near neighbors. They’ll be hoping their move across the city to Estadio La Peineta next season might bring a change of fortune.

Zinedine Zidane’s men also have a new destination in mind. They’re headed to Cardiff on June 3 to face Juventus in their third final in four years.