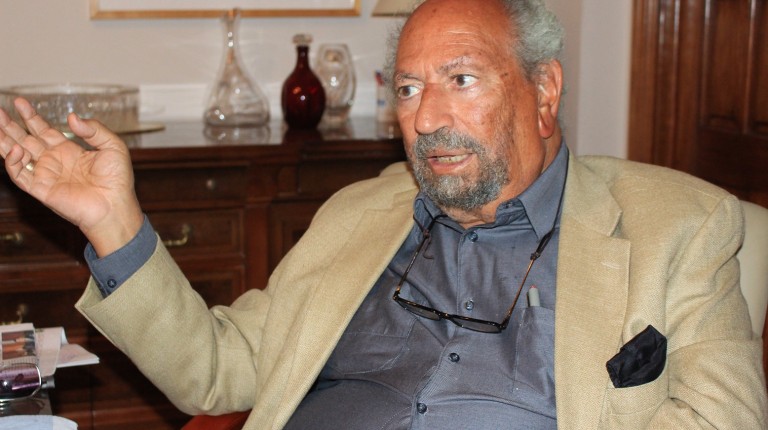 After his recent initiative for reconciliation with the Muslim Brotherhood, Daily News Egypt explores the current political and anthropological scene in Egypt with Saad Eddin Ibrahim, political thinker and chairperson of the trustees at the Ibn Khaldun Centre for Development Studies.

You have recently said in various, diversified media outlets that the reconciliation between the regime and the Muslim Brotherhood could take place. Is this a call from the regime or a personal reading into the current political situation?

The initiative is a purely personal effort. I’m part of the intelligentsia of this country and I can feel what’s happening on the ground. It’s my right to introduce an initiative to all the parties involved in political scene. They may agree with me or not. They may refuse or they may accept. It is their right to act as they wish. Nobody from the regime has contacted me. The initiative was inspired by similar reconciliations reached in many countries like Chile, South Africa, Algeria, Morocco, and Tunisia. Above all, prophet Muhammad had made a similar reconciliation. Revolutions in general are like volcanoes that see enormous conflicts, but after a while, it calms down and things should go back to normal.

Initially, the Muslim Brotherhood reacted positively to your initiative, but they keep changing their stance. The changing statements of Ibrahim Mounir are a clear example in this respect. How do you see that?

The Muslim Brotherhood is facing a very hard time, so they are currently in a state of confusion. Like all social movements, when facing setbacks and losses, the younger generation blames the old leaders. They blame them for undermining the long-awaited chance of ruling Egypt. In fact, whether they like it or not, the Brotherhood lost most of its popularity and sympathy in their cradle: Egypt. I met some of the group leaders in Istanbul who reacted positively, and Mounir also reacted positively in the beginning—this is something he can’t deny. I can understand his confusion that led him to deny and even slate me afterwards. When I was in Istanbul, I observed that the Brotherhood’s young cadres were stubborn and their minds were set on adhering to vengeful agendas.

Will the Muslim Brotherhood lose this “chance”?

Why did you anticipate the failure of 11 November protest call? Why you did you describe the popular anger as still in its infancy?

The truth is that President Abdel Fattah Al-Sisi still enjoys good popularity rates, though they slipped from 92% to 65%, according to the Ibn Khaldun Center for Research and Studies estimates. This is still a very good rate if we compare it to the global index of presidents’ popularity rates. We can’t compare our state of democracy to the western states, but we can’t deny that Egypt’s current democratic state is at its best if compared to the previous 50 years. The Egyptian military surely knows that there is rising popular anger and resentment, as they have their own centres of public opinion research and many other tools to know that Egyptians are dissatisfied.

Regarding the floating of the national currency and the recession of the Egyptian middle class—would these bear changes to Egypt’s political scene?

This is possible, but I think that floating the currency could lead to some balance for the time being. According to official statements, there is a race to exchange US dollars for Egyptian pounds. If we suppose that these statements are not correct, I still think that the current middle class in Egypt is becoming similar to the authorities in seeking stability above everything else. It suffers from what is called “revolutionary fatigue”, as they were the class that led the hard fight for change after the 25 January Revolution. In social sciences, it is an established fact that the expectations of the middle class are always beyond its capacity and this is what pushes society ahead.

Would this attitude of the middle class continue if the current popularity rates slumped even further due to poor political and economic performance?

With the continuous rise of feelings of bitterness toward not having their fair share of power and money, the middle class can punish the current authority by voting for representatives of more fascist or extreme politics. We can see that clearly in the election of Donald Trump in the United States.

What about the poor who make up the sweeping majority of Egyptian people?

There is great anger among the poor, but they remain disorganised as always. That’s why the middle class is the force behind any revolutionary activity because they are better organised and better educated. We can see that the middle class, the backbone of the Egyptian society, is seeing accelerated deterioration. People who constitute this class are deeply frustrated and angry, but these emotions are not always expressed by taking to the streets.

What role does the cultural elite play?

I can see that Egypt is seeing a wave of alienation of the intelligentsia, either physical or figurative, articulated through the alienation or denial of what is happening on the ground. This phenomenon is a symptom of collective popular discontent.

Are there any other phenomena you can see as indicators of public discontent?

I can see that in the upper bureaucratic body below the ministerial level, high-ranking executives and academics are feeling that there is looming danger. They are currently looking for alternatives by emigrating to the west, seeking jobs, education opportunities for their juniors, or even letting their wives or daughters give birth to their babies there.

Another indicator is transferring wealth outside the country regardless of any tiny possible economic advance as the general atmosphere is social pessimism.

If the regime doesn’t contain the anger, what scenario can we expect?

The anger will turn into discontent, which will turn into collective punitive behaviour, a part of which could take the shape of civil disobedience, especially among those who work in the governmental sector.

Could the famous figures affiliated with liberal politics play a role in the upcoming future?

I think out of all of them, Mohamed ElBaradei, Hamdeen Sabahy, and Ahmed Shafiq could play a role, if they wanted to.

The Egyptian youth think that these famous figures are outdated and can’t cope with the current political scene. Could younger faces, like Khaled Ali, play a role if the Egyptian military has the will to transfer power to civilians?

I don’t know the intentions of the military. What I know pretty well is that Egyptian people are deeply in love with the military. On the other hand, the military is not out of credit and may introduce new faces whose loyalty it can guarantee. The Egyptian military acts as a political party in Egypt by providing the public with direct daily services, infrastructure projects, and now basic food commodities. The military knows that in third world countries, the political parties or entities that proved success are those who provide people with direct needs and services. The Muslim Brotherhood and the Socialist Union in former president Gamal Abdel Nasser’s era had followed the same ideology.

You stated that the all-out political reconciliation would probably comprise early parliamentary and presidential elections. Why do you think the regime could offer that?

This could happen because the country is undergoing a very acute political and economic situation. If it were not for the International Monetary Fund (IMF) agreement and the financial support from the Gulf countries, the regime would be in a very hard situation that could accelerate complete failure. The authorities know these truths, so reaching reconciliation and introducing new tactics of inclusion of other political players could be crucial in light of previous truths.

You always state that the Muslim Brotherhood have to revise their policies. What are the things they have to do promptly?

They have to stop playing secret politics, open up their headquarters, and make their internal elections and regulations open to the public.

On the macro-level of thinking, they have to embrace a mindset of self-criticism and stop believing that they monopolise the utter truth. They also need to reorganise their ranks and elect a charismatic leadership.

While you adopted the initiative of reconciliation between the regime and the Brotherhood, Trump’s victory in the US presidential elections stirred talk about a harsher stance against the Brotherhood that could be adopted by the Republican congress. What could happen if such legislation is adopted?

I want to stress that the initiative is a personal endeavour from my side. Regarding the possible anti-Brotherhood legal procedures in congress, it could happen. The congress is manipulated by lobbies. Both the Egyptian state and the Brotherhood have lobbies that try to convince congress of their viewpoints. Lobbies’ standpoints simply require money, time, and effort to be won. I think the French and British legislative bodies’ possible action against the Brotherhood is much more influential to the American stance in this issue. Finally, if such legislation was adopted, this would surely hamper any possible reconciliation and the Egyptian regime would continue with its current policies against the Brotherhood who will be in a very embarrassing situation.

Some claim that Trump’s victory is in favour of Al-Sisi’s regime, unlike Hillary Clinton, who you said would have been a more favourable outcome.

For me, Clinton is more aware of the region and she has extensive experience in dealing with issues in the Middle East. But the margins of differences in attitudes and politics between any two US presidents don’t exceed 5% of the total equation of US politics. There are basic pillars of the US strategic politics in the Middle East—security of Israel, secure and free movement in the Egyptian territory, cooperation in the war on terrorism. Other things could see slight differences in approach by different US administrations. Egypt has been a cornerstone of US strategic interests in the Middle East, and will continue to be so.

What do you think of the latest pardon of political prisoners in Egypt?

A very good step, but I think it is not enough. Egypt needs to adopt legislations against detaining people on grounds of thoughts or political stances. The scandalous incident of Yehia Qalash, the head of the Press Syndicate, after the prisoners’ pardon made the pardon look like a fantasy. This reflects a deep problem in communication among the state’s government bodies. I call on President Al-Sisi to personally intervene to annul the legal procedure against Qalash. From the very beginning, this case shouldn’t have been dealt with on a criminal basis.

Finally, do you think there are possible waves of public anger in the foreseeable future in Egypt?

Anything is possible if the current circumstances and the same political mentality persist. A single event or string of events could cause the internal anger of Egyptians blow up.

Trump’s administration will include vital roles for Egypt, Saudi Arabia and Israel: Ibrahim

We have human rights violations, whoever overlooks them is blind: Saad Eddin Ibrahim

Government performance under Al-Sisi could be better: Saad Eddin Ibrahim

Continuity in Egypt: An interview with Saad Eddin Ibrahim