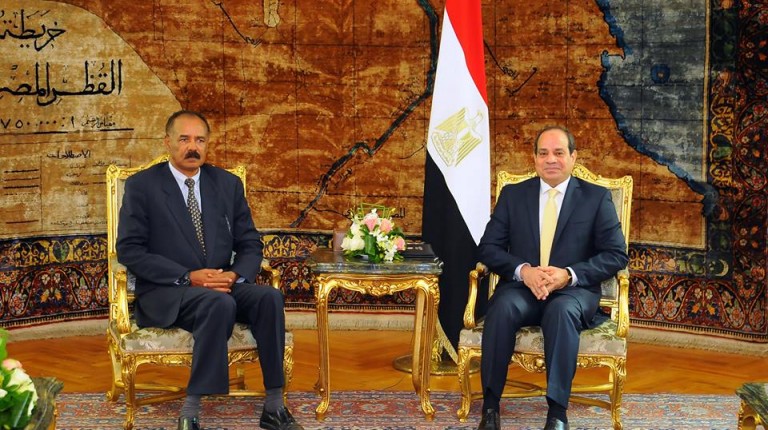 President Abdel Fattah Al-Sisi met on Tuesday with Eritrean president Isaias Afwerki in Cairo. During the meeting, Al-Sisi stressed on the importance of enhancing bilateral relations across all levels, according to a presidential statement.

The Eritrean president arrived to Cairo with a delegation that includes the Eritrean foreign minister.

Al-Sisi further commented on the necessity of activating a mutual cooperation committee with Eritrea to ensure that cooperation continues in all fields, including projects related to fishing and agriculture. The Egyptian president also shed light on the importance of coordinating with Eritrea in terms of a regular discussion regarding ongoing political situations in the region, stressing that Egypt doesn’t intervene in the domestic affairs of any country.

Afwerki praised Egypt’s role in attempting to achieve peace and stability across the African continent. He also stressed on the importance of mutual cooperation in all fields. The two presidents agreed on having regular visits of delegations from both countries to ensure that bilateral cooperation is moving towards positive paths.

In October, Ethiopia accused groups from Egypt and Eritrea of the encouraging unrest in Ethiopia, which led to a state of emergency. The Ethiopian government’s spokesperson reportedly said that Egypt and Eritrea are supporting the Oromo people, an ethnic group that is heavily persecuted in Ethiopia.