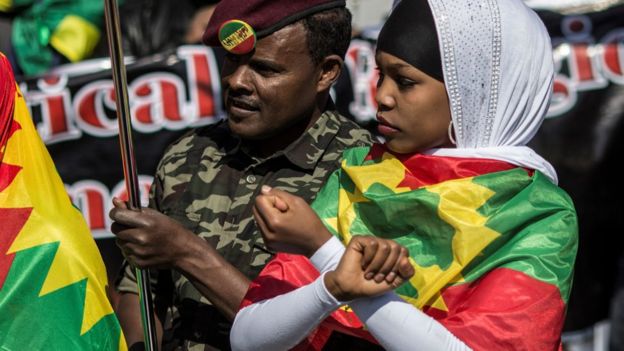 A number of Ethiopians, including people from the Oromo and Amhara ethnic groups, gathered in front of the United Nations Higher Commissioner for Refugees (UNHCR) office in Cairo on Sunday to protest against the Ethiopian government’s violations against opposition groups in their homeland.

Initially, security forces tried to prevent them from protesting but the protestors insisted, locking their hands above their heads and chanting. Another protest was being led by Sudanese nationals who were calling for UNHCR protection and recognition.

The Ethiopians have submitted a document to the UNHCR with their demands for their government, the head of the Ethiopian community in Egypt, who preferred to remain anonymous, told Daily News Egypt. The Oromo and Amhara communities are facing severe persecution by the Ethiopian government and believe that they are politically marginalised.

He added that the protest aimed to express their condemnation of the continued killing and detention of protesters. Ethiopians are currently fleeing their homeland in high numbers. According to the head of the community, in one week about 150 Ethiopians arrived in Egypt.

Scores of citizens have been killed in Ethiopia in clashes with security forces during protests against the Ethiopian government.

The opposition groups in Ethiopia mainly consist of the Oromo and Amhara communities, both of which represent the majority of the Ethiopian people.

The Ethiopian prime minister declared last week that the death toll in the Oromia region has reached at least 170, while another 120 have died in Amhara since the beginning of the protests. According to Quartz Africa, the death toll could increase to 500 people.

Activists and opposition groups have criticised the government’s estimation and said that more people have died during dispersals of protests by security forces.

The Oromo and Amhara represent the largest ethnic groups in Ethiopia. A significant proportion of these communities have fled Ethiopia due to the persecution and violent treatment by the state against them.

The Oromo people have an estimated population of 40 million, including 20,000 political prisoners who are accused of belonging to the Oromo Liberation Front, an outlawed group labelled a terrorist organisation.

In late July, two Ethiopian asylum seekers allegedly set themselves on fire in front of the UNHCR as part of a protest led by the Oromo community that sought to demand the right to seek asylum with the UN office.

This protest was part of continued attempts, which began in March, by the refugee community in Egypt to demand that the UNHCR recognise their communities, among other demands for fair treatment.

According to the UNHCR’s website, as of December 2015 Egypt was host to over 180,000 refugees from around the region, predominantly from Syria, Sudan, Ethiopia, Eritrea, and Iraq.