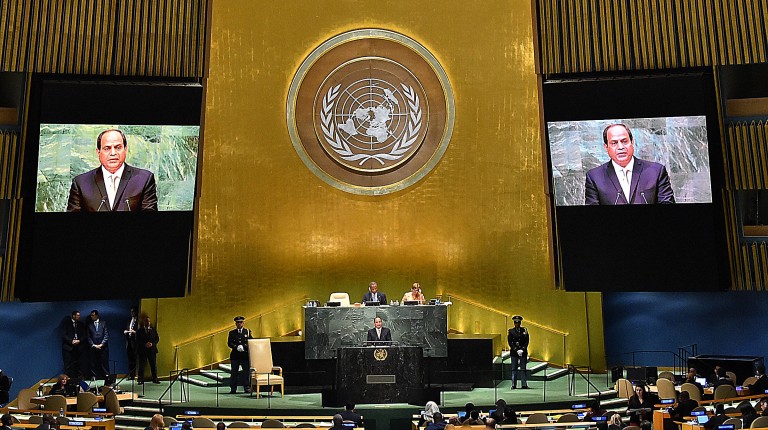 “It was a good speech in general, but many items needed rearrangement,” Fahmy told Daily News Egypt.

Al-Sisi first started addressing local issues on the development plans and the Sustainable Development Strategy: Egypt Vision 2030, then moved to regional and international affairs and then back to Arab and local affairs. According to Fahmy, the last part should have been switched with the first.

Among other national achievements, Al-Sisi highlighted the 2014 Constitution, which he said ensures the rights of all citizens. He mentioned the increased number of seats for women in the parliamentary elections in 2015 as an unprecedented example for achieving gender equality.

Al-Sisi spent too little time addressing the democratic transition in Egypt in his speech, according to Fahmy.

Al-Sisi addressed a wide array of regional issues during his speech, including Syria, Libya, Yemen, South Sudan, Burundi, and Palestine, among others.

Regarding the Palestinian-Israeli conflict, Al-Sisi diverted from the official speech and called on Israel to move forward with the Egyptian initiative to mediate between Israel and Palestine to implement the 2002 Arab Peace Initiative.

“This move is very precarious, as Al-Sisi not only calls for intermediation between both parties but for a comprehensive resolution,” Fahmy said.

On the other hand, Mohamed Gomaa, research analyst at the Ahram Center for Political Science and Social Studies, told Daily News Egypt that those statements are likely triggered by Egypt’s own interest. “If more conflict takes place between Israel and Hamas in Gaza, this will affect the situation in Egypt’s Sinai Peninsula,” Gomaa said.

Furthermore, he noted that all regional issues are witnessing hardships, with references to Syria and the doomed ceasefire deal, the situation in Libya, and Yemen. “It’s not likely that the oldest conflict of all of those will be resolved by just making such statements amid the absence of tangible plans on the ground,” Gomaa added.

In his speech, Al-Sisi did not provide additional information or comments regarding other regional issues like Yemen, Libya, and South Sudan. However, he concluded with a statement highlighting an urge of shutting down all online platforms that “incite violence”.

Egyptian media does not reflect reality in Egypt: Al-Sisi