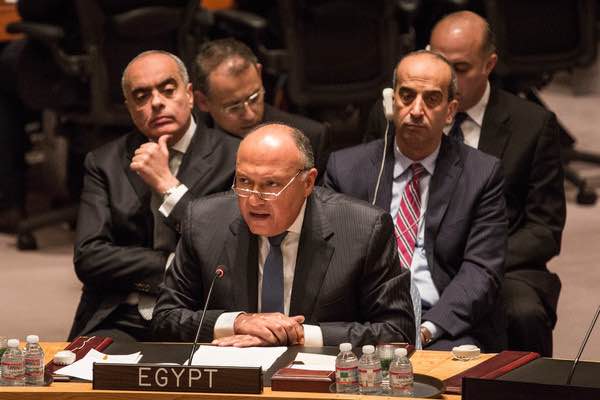 The peace process has not faced such ignorance and neglect since the Oslo agreement in 1993, said the Egyptian Minister of Foreign Affairs Sameh Shoukry.

At a ministerial meeting in Paris about the peace process between the Palestinians and Israelis, Shoukry put an emphasis on the necessity of cooperation between Moscow, Washington, and the EU in order to move the peace process forward to a solution.

Egypt is ready to revive the Arab peace initiative to establish a Palestinian state, he added.

Last week, Netanyahu pointed at the possibility of discussing the Arab initiative for peace which was introduced in 2002 and includes diplomatic recognition of Israel by Arab countries in return for establishing a Palestinian state.

“We are willing to negotiate with Arab states’ revisions to that initiative so it reflects the dramatic changes in the region since 2002 but maintains the agreed goal of two states for two peoples,” he added.

In Paris, Shoukry said the international community should commit to his own promises regarding solving the Palestinian issue, pointing to the declarations of the Egyptian President Abdel Fattah Al-Sisi about the peace process.

Al-Sisi said earlier that a peace agreement between Palestine and Israel will be the basis on which peace and stability is achieved across the entire region.

While the US is currently distracted by its own internal politics, France stepped in and organised an international conference in an attempt to reach a solution on the Palestinian-Israeli conflict.

While the Palestinians welcomed the French move, the Israelis said that direct negotiations are the best solution to achieving peace with Palestinians. Neither side has yet been invited to the conference.

The US secretary of state John Kerry said that the parties participating in the conference discussed the possibility of organising an international conference by the end of this year, but he asserted the importance of direct negotiations.

“What today emphasised is we need to find some kind of immediate steps on the ground that will make a difference,” Kerry told journalists. “We need to work with the parties. Everybody agreed today that you can’t impose a solution from the outside.”

The final statement of the conference warned of the current deadlock of the peace process that prevents the establishment of a Palestinian state and added that the direct negotiations between the two sides should be based on international resolutions.

The Saudi minister of foreign affairs Adel Al-Jubair said the Arab initiative that was presented in 2002 still has all the elements for a comprehensive settlement.

Sameh Shoukry returns to Cairo after Washington’s meetings against IS