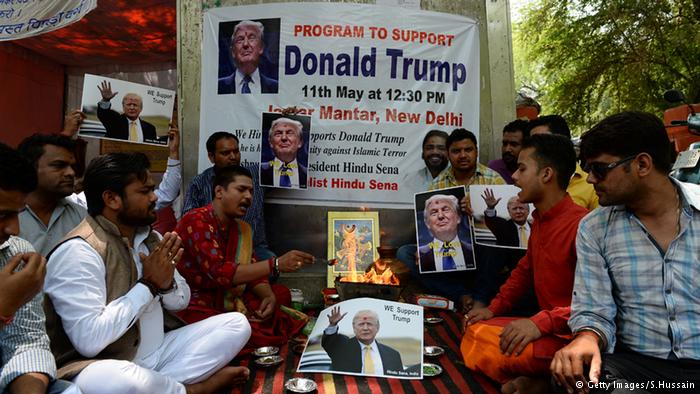 Trump’s anti-Muslim comments have found resonance with many conservative US citizens, but who could’ve imagined that a Hindu group in India would hold a ceremony to pray for the presumptive Republican nominee’s victory?
For Donald Trump, it is pretty tough to get his Republican Party’s leaders behind his campaign; however, the controversial US politician has got some supporters in India.

A dozen members of a right-wing Hindu group, Hindu Sena, held a ceremony in New Delhi on Wednesday, asking the Hindu gods to help Trump become the next US president. Apparently, Trump’s harsh comments about Islam and Muslims have drawn them closer to the Republican frontrunner.

A priest presided over the fire ceremony with photographs of Hanuman – the Hindu monkey god – and Trump, with tika (a red mark for good luck), daubed on his forehead.

Vishnu Gupta, the president of Hindu Sena, said Trump was a brave man who had vowed to crush Islamic terrorism if he was elected president of the US. He deserves our support, he added.

“The fire ritual has much importance in Hinduism, for the blessings of god we do this,” Gupta told media in the Indian capital.

“The world is screaming against Islamic terrorism, and even India is not safe from it. Only Donald Trump can save humanity,” he added.

Just like Trump says he would bar Muslims from coming to America if elected president, the extremist Hindu groups are against Muslim artists from Pakistan performing in India. Hindu Sena activists forced the cancellation of an event involving a Pakistani singer in New Delhi earlier this year.

Many Indian Muslims have complained they are being forced to convert by Hindu extremists. A number of Muslims have been attacked by right-wing Hindu groups for allegedly slaughtering cows – a sacred animal in the Hindu religion – or eating beef.

Some Indian activists and liberal writers draw parallels between Trump and Indian Prime Minister Narendra Modi, a Hindu nationalist politician known for his anti-Muslim rhetoric. They say that Modi is not doing enough to stop the members of his Bharatiya Janata Party from forcibly converting the country’s religious minorities to Hinduism.

Extremist Hindu groups might be hoping for closer ties between the US and India with Trump as possible US president and Modi at the helm in New Delhi.

The Donald’s dollars come from Frankfurt

What a Trump win would mean for the environment