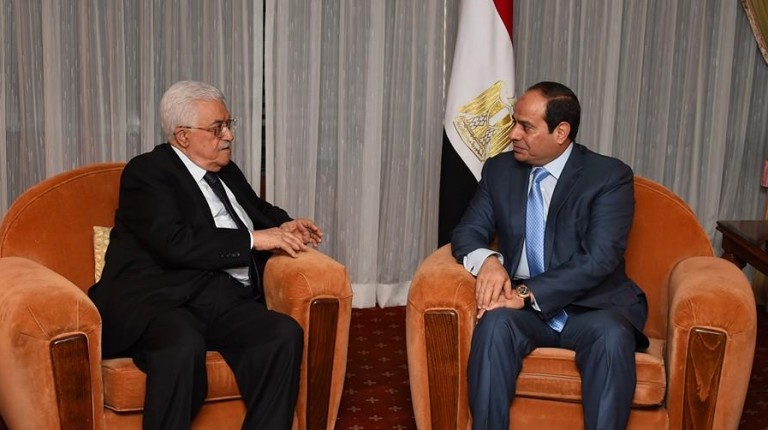 President Abdel Fattah Al-Sisi said Monday that Egypt will support any initiative that asserts that rights of the Palestinian people.

During his meeting with his Palestinian Mahmoud Abbas, Al-Sisi added that Egypt will continue to work to establish a Palestinian state in accord with the 1967 borders, a move that will help stabilise the region, according to a statement released by the presidency.

Abbas praised Egyptian efforts in support of the peace process and Palestinian unity.

Abbas also emphasised the importance of holding an international conference to establish a clear timetable for the end of Israel’s occupation of Palestinian land.

Both sides agreed on the importance of halting the construction of Israeli settlements and preparing an atmosphere to help facilitate talks through international initiatives.

Foreign Minister Sameh Shoukry said Sunday that there are several international initiatives on the table regarding the Palestinian case.

Shoukry told journalists after a meeting with the Palestinian president Mahmoud Abbas in Cairo that the two politicians discussed joint efforts to reach a peace agreement as soon as possible.

“We are always happy to hear from President Abbas about the next steps and about what is happening in the occupied territories”, Shoukry said.

Secretary General of the Palestinian Liberation Organisation (PLO) Saeb Erekat said that Egypt and Palestine agreed to address the conflict with UN Security Council which will hold a meeting in Egypt next and to find ways to execute the Security Council resolutions 605, 672, and 904 which provided for the protection of Palestinian people and the disarmament of Israeli settlers.

Both sides also discussed efforts to unify the Palestinian stance.

Al-Araby added that an international peace conference should be held after previous initiatives have stalled.

Shoukry will travel to New York on Monday to lead a ministerial meeting in the UN Security Council, which will hold a session regarding developments in Palestine.

Earlier this year, the French government began an effort to host an international conference planned for this summer to restore peace talks between Palestinian and Israeli authorities. It also vowed to recognise a Palestinian state if peace talks failed.