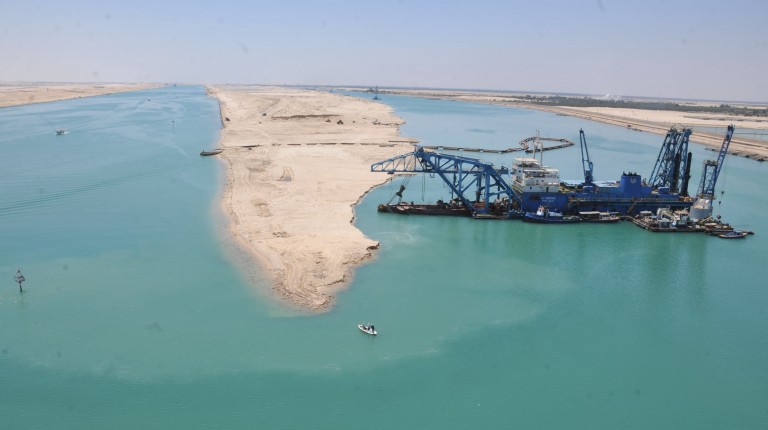 A number of heads of banks operating in the Egyptian market confirmed that banks have sufficient liquidity and technical expertise to finance the planned projects in the Suez Canal Area Development.

Chairman of the Suez Canal Economic Zone (SCZone) Ahmed Darwish previously called on banks to participate in financing infrastructure projects in the area, especially in East Port Said and Ain Sokhna. The projects are estimated to cost $2bn, excluding the investment projects that will be set up in that area.

According to previous statements by Darwish, five banks expressed willingness to finance projects for the installation of facilities in the lands and providing the area’s water and energy requirements. SCZone also received seven requests from major banks operating in the Egyptian market to participate in financing various projects in the Suez Canal.

According to Chairman of Banque Misr Mohamed El-Etreby, the loans-to-deposits ratio at banks operating in the Egyptian market ranges between 41% and 45%. This indicates that there is a lot of liquidity at banks, which is ready to be immediately injected into the Suez Canal projects.

The bank is prepared to finance any projects that are deemed feasible and capable of repaying the loans and interests. El-Etreby said the bank will not target funding projects in specific sectors.

He pointed out that Banque Misr is prepared to provide funding alone, if funds are found to be limited at banks. However, if there is an availability of funds at banks, it will take recourse to joint syndicated loans.

He further highlighted projects in the navigation and transportation, oil, and trade sectors as topping the list of projects that the bank will fund, noting that the network that will be created by the Suez Canal Area Development will benefit from the services offered by banks.

Hassan emphasised that MIDB is prepared to study the projects that will be put forward and to participate in their financing, particularly in light of the framework of attempts to diversify MIDB’s investments in various economic fields and sectors.

The bank has teams specialised in granting loans, that are capable of conducting economic feasibility studies for projects to ensure they will generate enough revenue to repay the loan instalments.

The bank allocated EGP 500m to finance small and medium-sized enterprises (SMEs) for youth and another EGP 500m for large projects planned in the area.

“The bank’s size prevents it from financing projects of the Suez Canal alone; but it is willing to participate in syndicated loans or to finance small projects,” Seif El-Nasr said.

The bank is currently studying a number of these projects, in preparation for funding including the launch of franchise projects in the fields of logistics, transportation, navigation, and distribution.

Chairman of the Industrial Development and Workers Bank of Egypt (IDBE) El-Sayed El-Kosayer said the banks is prepared to serve the planned projects in the Suez Canal Area, starting with providing funding, and including providing letters of credit and guarantee, and contributing to the provision of consulting and feasibility studies for these projects.

El-Kosayer anticipated that Suez Canal projects will impact on banks positively in light of the area’s strategic location, along with the expectation of attracting huge investments.

“The bank, with its strong financial position and high rates of liquidity, is qualified to play a significant role in supporting these projects,” he continued.

Further, Deputy Managing Director of Emirates NBD Sahar El-Damaty, similarly indicated the bank’s willingness to finance any project put forward for the development of the Suez Canal Area, noting that it has sufficient liquidity, both in local and foreign currencies, to invest in these projects.

“The parent bank in the UAE is very excited to enter as a partner with the bank in Egypt to finance these projects,” she said.

She said the bank’s role will not be limited to the funding projects that will be put forward in the Suez Canal alone; rather, it will also play the critical role of supporting UAE investors who wish to invest in these projects.

According to the chairman of an Arab bank operating in the Egyptian market, who requested to remain anonymous, the Suez Canal Zone is currently lacking in terms of the presence of foreign banks. The chairman said the presence of bank branches in the heart of this zone is crucial, since there will be large capital flows, in addition to large labour forces, which necessitates the existence of banking services.

Reform measures taken in 2016 to positively reflect on performance of economy, banks in 2017: El-Damaty

Port Said Harbour to be launched later this week