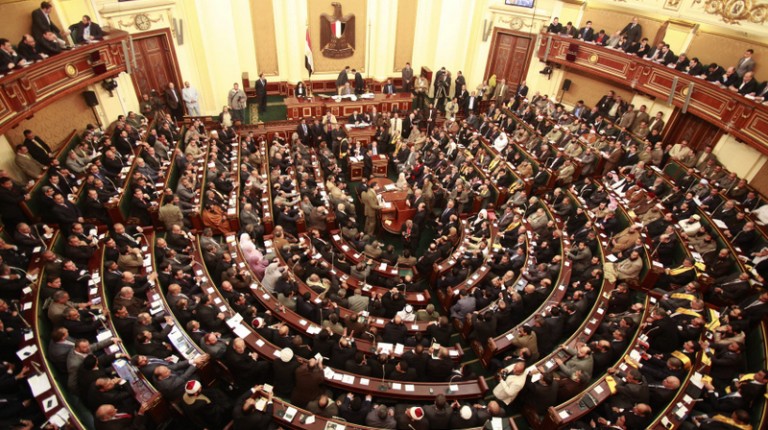 Egypt’s parliamentary elections will start in October, and will be divided into two phases. According to the Supreme Electoral Commission (SEC), the parliament will be established before the end of the current year, following previous postponements.

In a Sunday press conference, head of the SEC Judge Ayman Abbas announced the opening of candidates’ registration for 12 days starting Monday. The SEC’s declaration comes to finally implement numerous promises to form a parliament, as the third and final democratic step of a political roadmap that was announced back in July 2013.

The international community has seen the delay of the parliament as an obstacle to the establishment of a democratic state, while local politicians considered it an extension of the presidency’s legislative power.

Hundreds of laws and legislations were issued without a parliament, which is expected to revise them all within 15 days of convening, according to the constitution. On a different note, the electoral battle has raised a number of controversies. The president had stated in a speech that “citizens should carefully select the people who represent them,” calling on the public to “vote wisely”.

Nonetheless, the current political scene remains chaotic, with too many political parties forming alliances to empower themselves to compete against independent candidates, as the latter would form the majority of the parliament.

Despite holding regular press conferences, politicians do not speak to the public about any electoral programmes, raising tough questions on whom to vote for.

“I am going to vote because I understand the political importance of voting in general, but I hardly think this is the case in Egypt, as I believe this parliament is just a ‘décor’ and not a real representation of the people, let alone democracy,” Ahmed Youssef commented to Daily News Egypt Monday.

Youssef is 28 and works at an advertising agency. He had been a member of the Free Egyptians Party (FEP) but left after “realising it was all a game of interests controlled by those who hold powers”.

“I would not say the government is directly financing some candidates, but they are endorsing them and they will decide who wins,” Youssef said.

Daily News Egypt had also previously conducted a poll regarding the participation of voters in the upcoming elections. “I don’t see or hear PMs reaching out to me to gain my vote with a programme, with ideas, with a vision. It’s as though the purpose of local politics were – altogether misunderstood by the candidates. I’ll see their posters on the street, I might know their name and face, but what are they offering? I have no idea… So vote for what exactly?” Aalam Wassef wrote last May.

In another contribution to the poll, Farah Amr said: “Not that I’m optimistic or a positive person, but I will actually vote because I believe in the importance of political participation, even though I’m quite sure my vote is insignificant in this country.”

Moreover, Mostafa Bahgat said he had no trust in the methodology that was used in making parliamentary laws and revising them, which makes him “doubt electoral transparency”. On the other hand, Marwa Muhammad had a different opinion.

“Of course I will participate [in parliamentary elections]. This is our country we all have to unite and go on the way of enhancing every part of it. If we want real democracy and development, we can’t just log onto Facebook accounts and criticise; this is not the right way to develop a country,” Muhammad argued.

However, Youssef believes that there is a lack of political awareness in voters. “It seems that people are ignorant of politics but I expect that there is going to be a high turnout in participation enhanced by a big state budget for the elections,” Youssef said.

Despite his intentions to vote, Youssef said he did not know whom to vote for. “I don’t trust any politician, nor have any of them presented a programme I could review to make a decision.”

The younger political community in Egypt is usually more sceptical of the transparency of parliamentary elections and the role the parliament is going to have in developing any real democratic transition.

This has been widely expressed by the opposition Al-Dostour Party, for instance, which comprises the largest number of young members, who had opted for boycotting elections, in objection to what they referred to as “fake democracy”, and restrictions on political and human rights.

Still, older politicians have also raised the same concerns, shedding light on another issue that has become known as “political money”, aimed at the manipulation of public crowds through the use of money, including the indirect “buying of candidates”.

According to Tarek Fahmy, Political Science Professor at the American University in Cairo, political parties have no vision and no programmes to offer. Additionally, Fahmy stated that all political alliances currently being formed have no strong grounds and will separate after elections.

In fact, several political parties that formed coalitions ahead of the expected elections last March have already split, and new alliances were formed, amid regular changes.

“In fact, what is happening with the Egyptian elections has nothing to do with election standards. The process we are witnessing reflects instability in the electoral system and failures to properly understand its concept,” Fahmy said in Monday comments to Daily News Egypt.

This is why Fahmy agrees with a widely held view that the next parliament will bring back “figures of the old regime and political Islam”.

Transparency is at stake, according to Fahmy, because he strongly believes that neither the SEC nor any monitoring body in the country will have the capacity to oversee all the candidates’ expenditures on campaigns.

“So, as we can see, money is going to play a major role in those elections, and there is going to be massive pumping of money by rich candidates, especially businessmen involved in media promotion,” Fahmy explained.

For those reasons, Fahmy argues that it is going to affect voters’ will. “TV channels are going to be the actual voters, as they are going to directly tell people whom to vote for,” he stated.

Preparations for the elections began earlier this year, when they were supposed to be held last March. The SEC had even published the final list of accepted candidates, who had presented their files to the SEC.

The approval of candidates’ applications is followed by appeals filed against certain candidates, examined by court. For instance, business tycoon Ahmed Ezz’s application was rejected by the SEC due to his inability to open a new bank account specifically for the electoral campaign, and maintain transparency about transactions before the commission, due to a freeze on his assets pending legal cases.

They will submit a new application, as the SEC will re-examine their files to ensure candidature requirements are met. Those included undergoing a medical check-up.

Meanwhile, the re-arrangement of parliamentary elections included legal reforms. The allowance of Egyptian dual-citizenship holders to run for elections was among the rules that were changed.

Repeated promises to establish a parliament in post-30 June Egypt