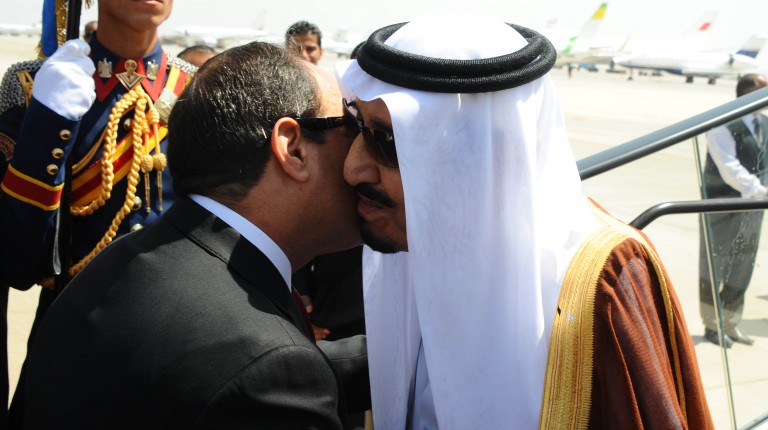 The draft confronts challenges that threaten Arab national security. In his speech, Al-Sisi tackled the situation in Libya, Yemen, Syria, Iraq, Palestine and methods to confront terrorism. Al-Sisi said that it was “inevitable” for a firm Arab stance towards the situation in Yemen as it threatened Yemen along with other Arab nations.

He noted that the situation in Libya should not be “tolerated” as it is getting more “dangerous and complicated” by the day. This necessitates the provision of all forms of support and assistance to the legitimate government in Libya, to enable it to enforce security and stability and fight terrorism.

He added that it makes no sense to ask the Libyan people to live under “the fire of terrorism until a political settlement” is reached. However, Egypt is backing the political dialogue between Libyan factions.

On the situation in Syria, Al-Sisi said Egypt looks into the situation from two perspectives: the first supports the aspirations of Syrians to build a democratic country; and the second to confront the widespread “terrorist” organisations.

Extensive discussions will be held involving Syrian national moderate opposition to reach a political solution in the country.

He highlighted the situation in Iraq, including the formulation of a new government and its completion of the constitutional requirements welcoming its policies to restore relations with neighbouring countries

Al-Sisi welcomed the talks between political powers in Lebanon to restore stability and the efforts to elect a president.

He also tackled Somalia, and Egypt’s support of its government which has been suffering instability and threats for over two decades.

Saudi Arabia, which led the military intervention in Yemen, noted during the summit that “the intervention will continue”.

Yemini President Abdelrabou Mansour Hadi called for the continuation of military intervention in Yemen as well as the formation of a joint Arab force until Al-Houthi groups leave areas they have occupied and their leaders are brought to justice.

Qatari Emir Sheikh Tamim bin Hamad Al-Thani tackled mainly the Palestinian cause in his speech, calling for an international Arab move to lift the siege on the Gaza Strip and to stop the settlement activity.

He commented on the situation in Syria, calling for Arabs to stand with Syrians, adding that the current Syrian regime “is not part of the solution”.

Qatari Emir blamed the escalation in Yemen on the Houthi rebels and former Yemini President and called on all Yemini political powers to respect Hadi’s legitimacy.

Regarding the situation in Libya, Qatar stressed its stance which is against military intervention in Libya, and called for only a political solution.

Arab leaders agreed on the importance of ridding the Middle East of nuclear weapons and weapons of mass destruction.

The Palestinian- Israeli conflict was addressed where Arab leaders agreed that resolving the Palestinian issue is important for the stability in the region.

The summit, which is being held in the Sinai resort of Sharm El-Sheikh, is due to end on 29 March.