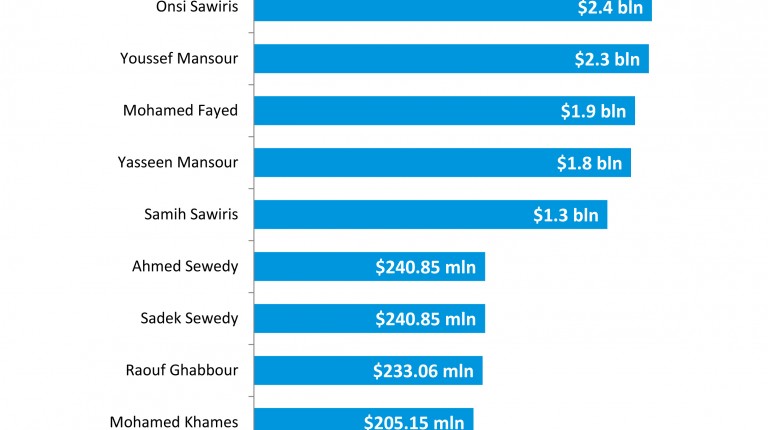 “Early to bed, early to rise, keeps you healthy, wealthy and wise,” Benjamin Franklin once said.

There seems to be 15 men in Egypt who follow for­mer US President Benjamin Franklin’s quote.

Like every year, prominent business magazine Forbes released its list on the world’s richest men 2014 – and as usual, Microsoft Founder Bill Gates and Mexican Telecom-Giant Carlos Slim Helu are wres­tling for first place. According to Forbes, 74-year-old Helu – or better known as “Slim” – has an esti­mated wealth of $79.8bn, whereas Gates is at $79.3bn.

The first Arab in the long list of the World’s Richest People comes at place 30, with no other than Prince Al-Waleed Bin Talal Al-Saud from Saudi Arabia. With a net worth of $21.4bn, the investor bare­ly owns a third of Gates’ fortune.

The second Arab is Mohammed Al-Amoudi, also known as one of Saudi Arabia’s “oil sheikhs”, although he comes at place 74 with a wealth of $14.4bn. This year, he is no longer richer than Mark Zuck­erberg, founder and owner of infamous most used website worldwide – Facebook.

Yet, it is not until further down that Egyptian businessmen earned a place on the list. In the long list of international billionaires and millionaires, Egypt has scored several times. Names like Sawiris, Sewedy, Mansour and Ghabbour come to mind at first thought. But to determine who is the richest of them all and who follows Franklin’s rule, one needs to carefully evaluate the wealth of each.

In this report, Egypt Business Directory brings you Egypt’s 15 Richest Men in 2014 and tells you about the most dominant families in the country – in terms of wealth of course.

With a net worth of $6.7bn (in 2011 it was $4.75bn, and in 2013 it stood at $6.6bn), Nassef Sawiris runs Orascom Construction Industries, Egypt’s most valuable publicly-traded company, which was founded by father Onsi. The construction and fertilizer company’s shares fell almost one-third dur­ing the protests leading up to Egyptian Presi­dent Hosni Mubarak’s resignation in February 2011.

Sawiris also owns big stakes in cement giant Lafarge, and Texas Industries. Recently, Prime Minister Ibrahim Mehleb met Sawiris to seek a settlement to the tax dispute between Sawiris and the Tax Authority. The former was sentenced to three years in prison and was fined EGP 50m. On 28 July, 2014, Sawiris was the second biggest “winner” in the world, gaining over $650m in one day, most likely due to a surge in Lafarges’s Q2 net profit. His brothers Samih and Na­guib are also two of Egypt’s richest men.

Mohamed Mansour (net worth $3.2bn in 2014 – $1.7bn in 2011) and his broth­ers are the biggest sellers of GM vehicles in the world. Strong sales in their Caterpillar business throughout Africa, Russia and Iraq are making up for a slump in Egypt. Other interests include the largest supermarket chain in Egypt (Metro), and the Philip Morris franchise. In July 2014, Electronic Cigarettes International Group re­ceived a Strategic Equity Investment from the Mansour Group of up to $60m.

With a net worth of $2.8bn (in 2011 it was $2.9bn – in 2013 $2.5bn), Naguib Sawiris, the eldest son of Egyptian billionaire Onsi Sawiris, built Orascom Tel­ecom, then sold the family’s stake to emerging Russian market telecom giant Vimpel­Com in April 2013 for $6.5bn in shares and cash, becoming one of VimpelCom’s larg­est shareholders in the process. Recently he also acquired a 20%stake in EFG-Hermes, which failed however, since sharehold­ers are offered less than half the shares sought.

With a net worth of $2bn ($2.6bn in 2011), Onsi Sawiris is the patriarch of Egypt’s wealthiest family. The Egyptian govern­ment nationalized his first construction busi­ness in 1971. Undeterred, he rebuilt what be­came Orascom Construction Industries. His son Nassef took over in 1995. Another son, Naguib, built a separate telecom company, while son Samih went into hotels and real estate. Onsi Sawiris now owns shares in Russian mobile op­erator VimpelCom, following its acquisition of the family stake in Orascom Telecom in 2011.

With a net worth of $2.3bn ($1.55bn in 2011 – $1.95bn in 2013), Youssef Mansour keeps a low profile. He owns assets, in publicly traded real estate development company Palm Hills Developments. Youssef is responsible for building Egypt’s largest super­market chain, Metro, but now devotes time to the family foundation which targets illiteracy and education. The bulk of his fortune comes from the family’s business as the largest seller of GM vehicles in the world, and strong sales of Caterpillar machines.

With net worth of $1.9bn, Mohamed Fayed stands at rank 5. Back in the 50s, he set up The General Navigation Company (Genavco), which was later nationalized by Ga­mal Abdel Nasser. Serving as the Chairman of Harrods in London for over 25 years, Fayed also bought British football team Fulham Football Club and even dined with Iron Woman Margret Thatcher at 10 Downing Street because he man­aged his finances in a way that was beneficial to the British economy. He bought France’s hotel Ritz in 1979.

With a net worth of $1.8bn ($1.55bn in 2011), Yasseen Mansour, the youngest of Egypt’s three Mansour brothers, was put on the Interpol list on fraud charges in 2011, but was removed after being cleared of corrup­tion charges over the misappropriation of state land for Palm Hills Developments. Yasseen, his brothers and cousin are the largest sharehold­ers in the company. He started his career at Mansour Automotive Company in 1986, and has since successfully lead and managed several companies in various sectors.

Samih Sawiris is the Chairman of Orascom Development Holding, which mainly serves in the tourism sector. He also developed a low income housing project in 6th of October City and is a member of the Sawiris Foundation.

Ahmed El-Sewedy is the Chief Executive Officer and Manag­ing Director at El-Sewedy Electro-meter Egypt. Graduated from Cairo University, he joined the family business which was founded in 1938.

Sadek El-Sewedy is the Chairman at El-Sewedy Electric Com­pany. He owns 23.33% of the company’s shares and had also served on the board at Arabia Investments Development and Fi­nancial Investments Holding.

Raouf Ghabbour is the Chairman and Chief Execu­tive Officer of Ghabbour Auto (GB Auto), which was founded in 1999 and manufactures trucks, buses etc. He holds 31.52% of its shares.

Mohamed Farid Khames is the founder of Oriental Weavers, one of the biggest carpet manufacturers in the world which was established in 1980. He holds 41.81% of its shares.

Mohamed El-Sewedy is the cousin of Sadik El-Sewedy and owns 17.26% of the family business El-Sewedy Electric.-The company also constructs and runs plants in the electrical manufacturing sector.

Abdul Rahman Hassan Sharbatly is the Deputy Chairman of Golden Pyramids Plaza, Chairman of Al-Nahla Group and serves on the boards of Riyad Bank and Al-Sagr Cooperative Insurance Company.

The number of millionaires in Egypt