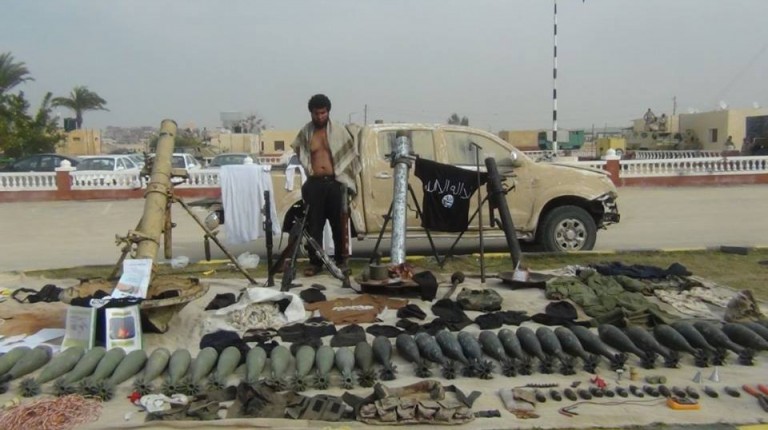 The armed forces killed 3 militants in an exchange of fire in Al-Arish and arrested 68 others during armed forces operations between 21 January and 26 January, according to a military spokesman statement released Tuesday.

Out of the 68 arrested, 17 were “wanted” and 40 were “suspects”. One of them was said to be Palestinian. The remaining 11 were allegedly attempting to target a military unit in Cairo and are currently being investigated, the military spokesman noted.

Along with the statement, the armed forces posted 40 photos, showcasing weapons and ammunition seized from North-Sinai-based militants. Some photos show a seized pick-up truck, in front of at least four mortars and some 30 mortar shells, along with automatic firearms, grenades, and other military equipment.

Significantly, the whole pick-up truck, including its windows, is coated in camouflage – exactly like the pick-up trucks seen in previous photos posted online by ‘State of Sinai’ militants, as part of their propaganda campaign.

The similarity of the vehicles is significant because the armed forces typically dismiss all ‘State of Sinai’ photo and video evidence as “fabricated” or originating from abroad.

In a previously published analysis of the photos posted by the militants, Daily News Egypt speculated that the colouring of the pick-up trucks seemed to be intended to make it harder for helicopters and planes to detect them from the sky.

‘State of Sinai’ released a video Monday claiming the abduction of police officer Ayman Ibrahim Al-Desouky on 11 January. The video shows at least four armed militants running a checkpoint on the Arish-Rafah international road and seizing Al-Desouky from a car, as he yells that is wife was pregnant. The video later features graphic images of the execution of Al-Desouky.

The insurgency in North Sinai led the authorities to establish a limited state of emergency in the area, including a night-time curfew. While the curfew was supposed to end on 25 January, the cabinet recently announced that it would be extended until 25 April.

The entire town of Rafah, along the border with Gaza, is being evacuated in order to build a buffer zone that will prevent smugglers from using underground tunnels to move goods and people between Egypt and the Palestinian enclave. Egyptian authorities claim that militants used the tunnels to obtain weapons and infiltrate fighters from Gaza.