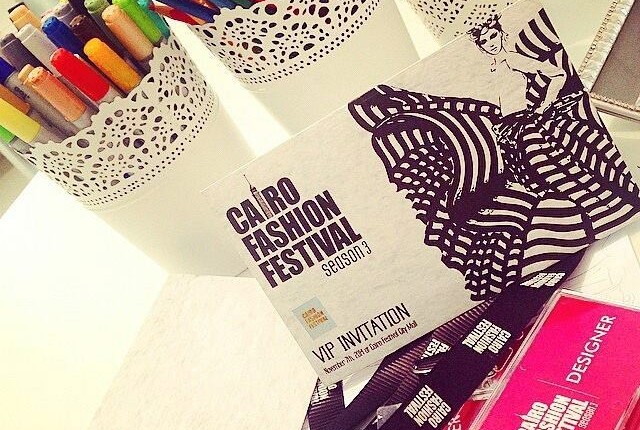 The Cairo Fashion Festival (CFF) will give its guests a day of fashion utopia.  A bazaar with more than 50 exhibitors, 15 runway shows, live entertainment, and a group of inspiring fashion speeches will all be held at Cairo Festival City Mall’s amphitheatre, according to the festival’s event on Facebook.

“What’s new about the festival is that we don’t only organise a fashion show runway, we also expose the designers to a different way,” said Omar Madkour, co-founder of CFF.

In Ego department store, the festival will offer a permanent section for local and international designers, which will be operated by Cairo Fashion Festival, Madkour said.

One of the participants, Norine Farah, is a 25 year-old fashion designer, who has launched her own line in her hometown, Alexandria. Farah, who studied hotel management at the beginning, unaware of her passion for fashion, decided to learn more about the field. She flew to Italy’s Polimoda and Instituto Marangoni, then returned to Egypt with a head full of colourful ambitions about her fashion career.

Farah, who doesn’t consider herself a minimalist, uses velvet in her work. In her runway show at CFF, which is her first, she plans to start her colour scheme with aubergine, followed by navy and purple in her winter collection, then pastel colours and silver, and finally ending with bridal wear.

“I love detail, and I love to accentuate the woman’s body to make her look the prettiest,” said the Alexandrian fashion designer.

Farah designs nightgowns and has recently started designing bridal dresses. Experimenting with casual attire, she is looking forward to designing shoes, bags and accessories, she said.

Joining CFF will offer her a great chance to expand, she said. She added that it would also give her the chance to meet other “young fresh entrepreneurs”, as she describes herself, as well as provide her with contacts in the fashion industry.

“I’m very happy that we got to open up this segment in Egypt, because we lacked it,” she said, “Egyptians are quite creative.”

Iman Saab, a Lebanese 30 year-old fashion designer, has another story.

Unlike Farah, Saab has always wanted to be a fashion designer since she was a young girl, but her parents opposed the idea of her going to fashion school. Saab, who ended up studying dentistry, insisted on pursuing her own dream after graduation, and later studied at École Supérieure des Arts et Techniques de la Mode (ESMOD), a fashion school in Beirut.

“In the end, one succeeds at what they love,” she said.

Saab describes her line’s style as “classy and simple”. Playing with shapes and geometrics in her designs, she likes to deviate from the norm, she added.

It’s been a month since Saab moved to Egypt and opened her atelier in Cairo.  Most of Saab’s customers back in Beirut were Egyptian, so she thought it would be better if she moved to Egypt since there’s more demand.

“Fashion in Egypt has developed and changed a lot, taste has changed, and there are more designers” said Saab.

CFF is a seasonal event, which was founded in 2012. The initiative began with the aim of promoting fashion designers in Egypt, because there has been “a thirst” for local fashion shows and runways in the country, said Madkour.

The only fashion shows available featured only international designers, so local designers had no opportunity to “bring their work to light,” Madkour said.

Up Fuse: finding colours and patterns amid plastic garbage