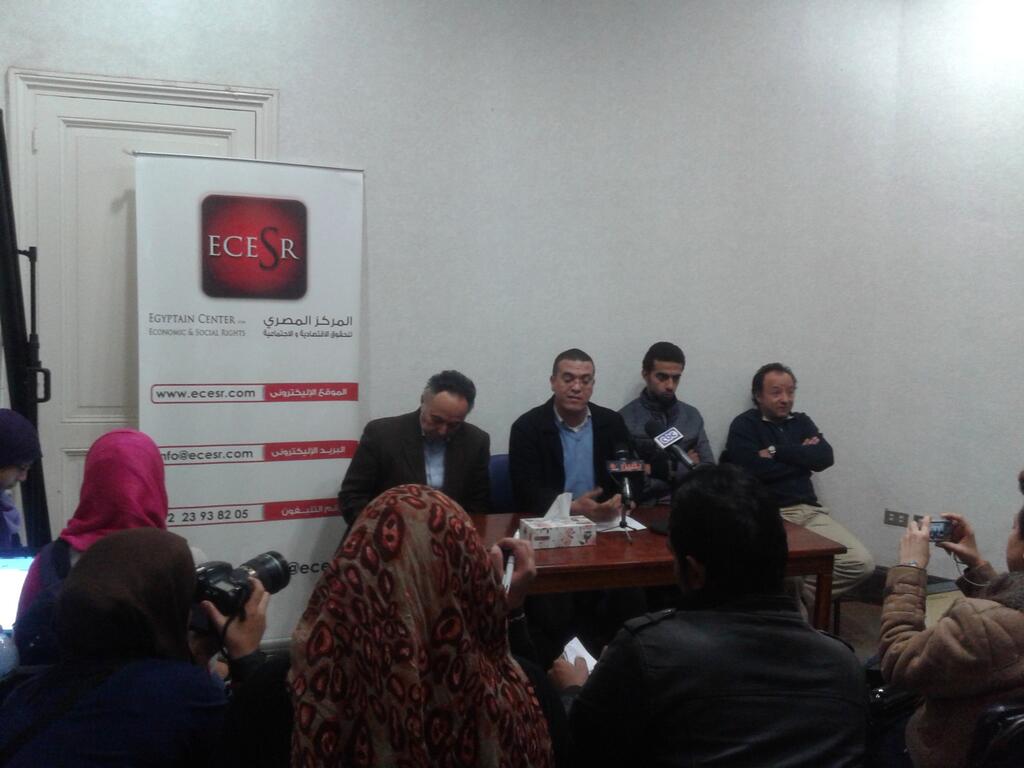 Several rights groups made a joint statement Thursday condemning the raid on the Egyptian Centre for Economic and Social Rights (ECESR).

The statement mentioned the details of the raid, saying that a security force of 50 armed personnel in plain clothes raided the office on Wednesday at 11:30 PM without a warrant, confiscated several computers and assaulted several staff members and volunteers before arresting them.

The statement added that the centre’s lawyers filed a formal complaint, after the Abdeen and Kasr Al-Nile police stations did not cooperate, withholding the location of the detained.

“This is a new level of escalation against human rights organisations, this time the state is directly targeting us after it had defamed us and incited against us,” lamented the Rights groups.

The statement wondered, “if Adel was the only one meant by the arrest then why the police force was waiting outside the building before Adel’s arrival yet he wasn’t arrested before he entered the centre? And why have they arrested and assaulted staffers from the centre along with one of the officers from Kasr Al-Nile police station who recognised Belal when tried to stop the assault against him?”

The statement concluded that this violation happened a day before a press conference for the workers. All the rights groups that signed the statement vowed to continue their humanitarian work despite all threats and intimidation from the “police state.”

The statement was signed by several rights groups including: ECESR, Hisham Mubarak Center, Al-Nadim Center, The Arabic Network for Human Rights Information, The Association of Freedom of Thought and Expression, Nazra for Feminist studies amongst others.

ECESR Lawyer Mahmoud Belal describes his detention, “I witnessed one of the police officers putting his weapon in Mustafa Eissa’s mouth as a threat, and afterwards they took off our clothes, blindfolded us, tied our hands behind our backs and took us to an unknown location. Some hours later they released all of us except for Mohamed Adel as they said he was the only one targeted by the arrest.”

Belal added that they could have arrested Adel from any other location, “but arresting him from ECESR was deliberate as a showcase of the state’s power and authority.”

Adel is facing charges of violating the protest law along with 6 April founder Ahmed Maher and activist Ahmed Douma. The three are accused of organising a protest outside Abdeen court house without making the required prior legal notice.