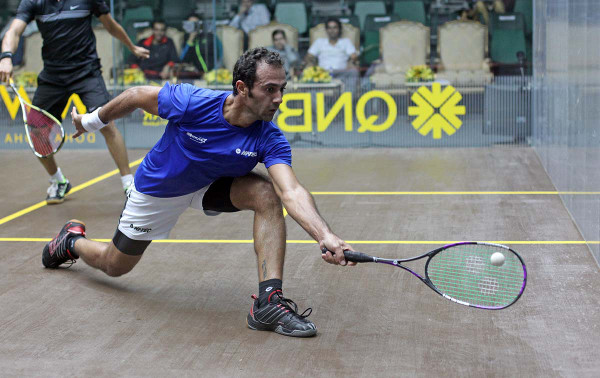 Egyptian squash maestro Amr Shabana has become one of an elite group of squash legends to complete an unbroken 10-year run as a top 10 ranked player on the PSA World Tour.

The 34-year-old four-time World Champion has climbed one place to ninth in the latest Dunlop PSA Men’s World Squash Rankings, released today, meaning he joins modern day icons such as David Palmer, Thierry Lincou and Peter Nicol as one of just a handful of players who have maintained a 10-year top 10 presence.

“I feel very fortunate to have had the career path that I did and still be able to compete – these 10 years went so fast,” said Shabana.

“I’ll take every day now to the end of my career with great joy and pride. I feel physically and mentally as strong as I have ever been, but have been very unlucky with illnesses and injuries the past two years, so I’m trying to keep my head down and keep at it.”

Cairo-based Shabana made his debut in the top 10 in January 2004 after upsetting the odds to win the 2003 World Championship, becoming the first Egyptian to claim the title, before going on to become the first Egyptian to top the Men’s World Rankings in 2006, maintaining his stranglehold on top spot for 33 months until December 2008.

“My greatest and proudest achievement has to be my first World Open title in 2003,” he said. “Winning it four times has been a dream come true – but coming from Egypt, a country which produced some of the greatest squash players ever, and being the first Egyptian World Champion is something I am very proud of.

“My ambitions now are to win matches, each one as they come. The depth and standard has increased immensely in the game over the past ten years – squash players are without a doubt probably some of the strongest athletes I’ve personally seen in terms of fitness and conditioning.

“As you go down the rankings, the conditioning capabilities and squash levels are still at their highest.

“It was a huge shock when I was ranked 11 in the world and won the world championship in 2003 – but right now it isn’t far-fetched to have someone play well in the top 20 and win the World Championship as they are just as good as the world number one, which maybe wasn’t the case before.”

Elsewhere in the December Rankings, Shabana’s compatriot Ramy Ashour maintained his place at World No.1, completing a 12-month spell at the top of the table.

Frenchman Gregory Gaultier has maintained his World No.2 ranking while 2013 AJ Bell PSA World Squash Champion Nick Matthew of England has moved up one place in the standings to World No.3.

Other players to mark career-high rankings in the top 20 include Spain’s Borja Golan (World No.7), Columbian Miguel Angel Rodriguez (World No.13), India’s Saurav Ghosal (World No.15) and Egypt’s Karim Abdel Gawad (World No.19).

Today, I contribute to the sport in a different way: squash champion Shabana