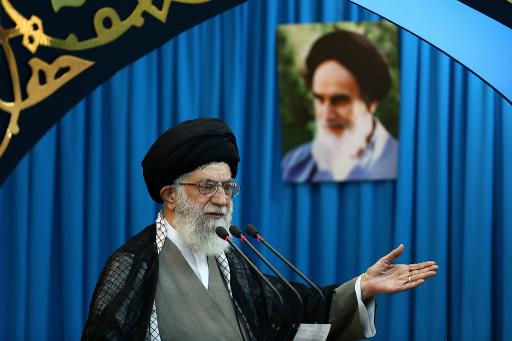 Predicting the demise of “rabid dog” Israel, which Iran has accused of trying to “torpedo” a deal, Ayatollah Ali Khamenei said the powers must respect the Islamic republic’s “red lines”.

“I insist on not retreating one step from the rights of the Iranian nation,” Khamenei, 74, told militiamen of the Basij force in a rare, live televised address.

France said that his comments – he said Israel’s leaders were “not worthy to be called human” – are “unacceptable and complicate negotiations” on Iran’s nuclear programme.

Hassan Rouhani’s election as president in June has raised big hopes for an end to the standoff over Tehran’s nuclear programme after a decade of failed initiatives and rising tensions.

But Israel, widely assumed to have a formidable nuclear arsenal itself although it has never admitted it, has expressed alarm at the mooted deal on the table in Geneva.

Instead of stopping all uranium enrichment, as multiple UN Security Council resolutions have demanded, the powers appear to be happy with a suspension of enrichment at medium levels.

Along with other steps, this would be a “first-phase” deal while a long-term accord is hammered out by Iran and the United States, China, Russia, Britain, France and Germany, known collectively as the P5+1.

For Israeli Prime Minister Benjamin Netanyahu, who arrived in Moscow on Wednesday where he will seek to press Russian President Vladimir Putin to harden his stance, this leaves intact Iran’s ability to make a bomb.

“You are not really dismantling any capacity to make fissile material for nuclear weapons,” he said in an interview published in top-selling German daily Bild on Tuesday.

Israel has refused to rule out bombing Iran, as it was assumed to do with an Iraqi reactor in 1981 and a Syrian site in 2007. Iran says its programme is peaceful and the West should condemn Israel’s nuclear arsenal.

Uranium enrichment is the main worry for the international community since enriched uranium has civilian uses but also can go into a bomb.

Iran already has enough for several bombs if it chose to enrich further to weapons-grade, a “breakout” that – for now – would be detected by the International Atomic Energy Agency UN watchdog.

It remains to be seen whether Iran, seeking an easing of UN, US and EU sanctions that have more than halved the country’s lifeblood oil exports, will accept what it is being offered in return.

On the table in the third meeting since Rouhani took office is “limited, temporary, targeted and reversible” relief that a senior US official said “will not come anywhere near helping Iran escape the hole that we’ve put them in.”

“We will maintain the sanctions as long as we are not certain that Iran has definitively and irreversibly renounced its military programme to obtain nuclear weapons,” French President Francois Hollande said in Israel on Monday.

If his “charm offensive” fails to secure quick and substantial relief from the sanctions, Rouhani risks losing the support of arch-conservatives and ultimately the supreme leader, experts say.

Nevertheless Iran’s foreign minister was upbeat about the prospects of reaching a deal in Geneva, 10 days after a high-drama gathering in the same Swiss city came close but ultimately failed.

“I think there is every possibility for success,” Mohammad Javad Zarif, who also posted a conciliatory but defiant video message online on Tuesday, said on a stopover in Rome.

Zarif was due to hold bilateral talks with P5+1 lead negotiator and EU foreign policy chief Catherine Ashton later Wednesday. Her spokesman said that political directors from the powers were currently meeting.

But US President Barack Obama, fresh from seeking to dissuade lawmakers from imposing new sanctions on Iran, was more cautious: “I don’t know if we will be able to close a deal this week or next week.”

German Foreign Minister Guido Westerwelle said that the last round “showed that a diplomatic solution is possible … At issue now is entering a first phase of confidence-building steps.”

Calling the talks an “historic opportunity” British counterpart William Hague said in Turkey that the differences were “narrow and … can be bridged through political will and commitment”.