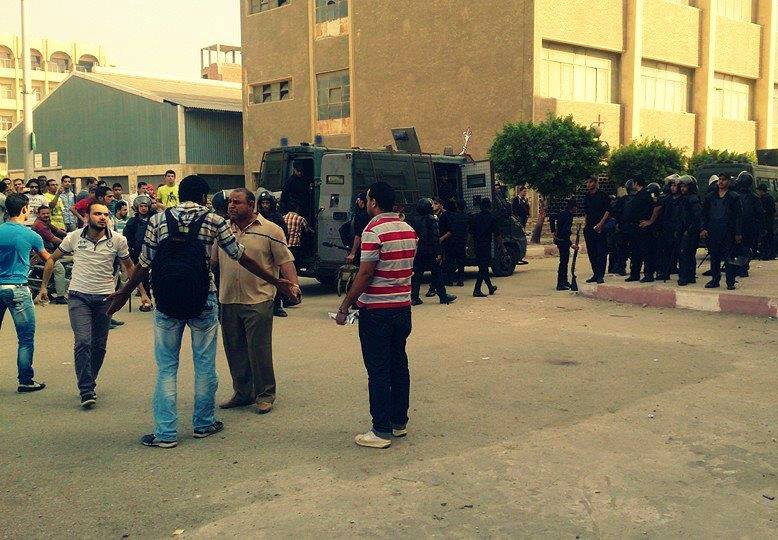 On Saturday morning, Central Security Forces (CSF) attempted to disperse a strike organised by the students of the Faculty of Engineering in Zagazig University.

Zagazig University has seen continuous turmoil since last week, where a group of students from the Faculty of Physical Education attacked another group from the Faculty of Engineering. In the same week, Association of Freedom of Thought and Expression Student Observatory (AFTE) reported that the administrative security attacked students belonging to the Muslim Brotherhood who were protesting against what they call the “3 July coup”.

The students organised the strike to condemn these violations and the arrest of students from their homes. The students closed the doors of the Faculty of Engineering and stopped the midterm exams from taking place.

An eye witness who is a member of the Engineering Student Union but refused to mention his name said: “Students from the School of Engineering are outraged with the violations that are taking place. The student union wasn’t supporting the idea of the strike at the beginning, but when the majority of the students were pro-strike, we decided to do it.”

He added: “The strike started today at 7.30am until 10.30am, when CSF trucks stormed on campus; they used tear gas, batons, and yellow smoke bombs to help identify the students who were on the premises [during] the strike”.

The Ministry of Interior (MOI) gave a statement on Saturday which said that the Sharqeya security director received a request from the President of Zagazig University to contain the riot incited by members of the Muslim Brotherhood in the Faculty of Engineering and were preventing students from taking their midterm exams.

The statement added that the situation was contained and is currently stable after a number of students responsible for the riots were arrested.

Last October, Prime Minister Hazem El-Beblawi announced that police forces would be present at university gates to help maintain security. El-Beblawi’s cabinet gave university presidents the right to request the entry of police forces onto campuses in the case of “threats to individuals, entities and students”.

According to AFTE Student Observatory, after CSF stormed the university campus, the school day was halted, exams in the Faculty of Engineering were cancelled and students remained on strike until their demands are met.

According to the member of the Engineering Student Union, students demand the release of the detained students (those detained last week along with the Saturday detainees), an official apology from the president of the university for the Saturday events, fixing the damage made by ‘thugs’ and replacing the administrative security by a civilian security company.

Last Wednesday six students were arrested from their homes, according to AFTE researcher Mohamed Nagy. The students included members from the 6 April Youth Movement and the Revolutionary Socialists.

On Saturday hundreds of Al-Azhar students protested on the university campus against the 17-year sentence handed to the students who broke into the Al-Azhar administration offices, according to  AFTE.