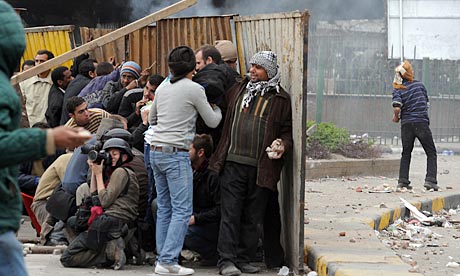 The Press Syndicate is filing official complaints against all those who attacked its members in the past month.

Syndicate secretary general Karem Mahmoud said the syndicate will file the reports in the next couple of days, after the end of the Eid Al-Fitr vacation.

Mahmoud said the syndicate has received at least 14 reports from members claiming to have been attacked while covering sit-ins supporting ousted president Mohamed Morsi at Rabaa Al-Adaweya in Cairo and Al-Nahda Square in Giza.

On Monday 4 August the Association for Freedom of Thought and Expression (AFTE) listed 21 cases of attacks against journalists between 26 June and 27 July.

The report stated that the assaults included minor attacks, birdshot, beatings and confiscating cameras. Two assaults resulted in deaths: Andrew Pochter, an American student and freelance journalist who was stabbed to death by pro-Morsi protesters in Alexandria on 28 June, and Ahmed Assem, a reporter at the Freedom and Justice Party (FJP) newspaper who was “shot dead by an armed forces sniper whom Assem was shooting with his camera” on 8 July during the Republican Guards clashes.

“We will report all assaults…and the identity of the assailants,” Mahmoud said. “Reports will be made according to fellow journalists’ testimonies. We will press charges against those who carried out the attacks and those who incited them.”

A group of Muslim Brotherhood leaders will face trial on 25 August for inciting violence against protesters in front of the Brotherhood’s headquarters in Moqattam.

Supreme Guide of the Brotherhood Mohamed Badie, his deputy Khairat El-Shater and member of the Guidance Bureau Mohamed Rashad Bayoumi are accused of inciting murder and assisting the accused murderers Mostafa Abdel Azim, Mohamed Abdel Azim and Atef Abdel Galil. They are all accused of possessing weapons.

Brotherhood leaders are also accused of inciting a set of violent incidents since Morsi’s ouster.

AFTE stated in its report the treatment of journalists since Morsi’s ouster hasn’t changed from their treatment during the rule of the Brotherhood, or the Supreme Council of the Armed Forces before it. It stated that 21 assaults is a “huge” number, especially taking into account that the association’s latest report on violence against journalists, spanning four months, listed 53 assaults.

“When will the time come for respecting journalists and guaranteeing that they practice their job freely without any roadblocks or threats?” AFTE asked in the report.

On Friday, journalist Aya Hassan claimed she was forcibly taken to the Al-Nahda Square sit-in and threatened with violence by pro- Morsi protesters who looked through the images on her camera. Demonstrators in Al-Nahda denied the incident took place.