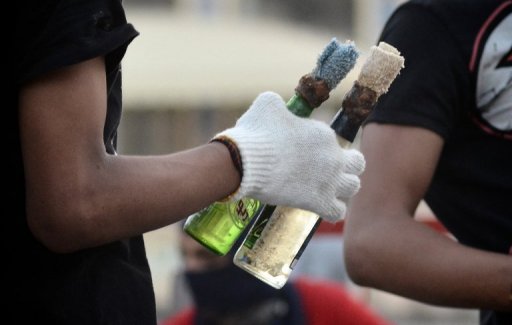 AFP – Bahraini authorities have arrested three “terrorists” who allegedly hurled firebombs at the home of a Shi’a lawmaker without causing casualties even though he was inside when the assault occurred, police said on Tuesday.

“Investigations have led to the identification and arrest of three terrorists who will be referred to public prosecution,” the police said in a statement carried by the official BNA news agency.

It said other suspects involved in the attack remain at large.

Shi’a MP Abbas Al-Madi was at his home in the town of Deir, near the capital Manama, during the early Monday attack that left parts of his house damaged and burnt.

“This terrorist act is unacceptable,” he said in a statement, adding that “sabotage was never a means for reform and using terrorism to silence others has never been a way towards democracy.”

He was apparently referring to opposition groups of young activists who frequently clash with police forces and who are branded as “terrorists” by authorities.

Bahrain’s 40-member parliament is dominated by pro-regime lawmakers since the 18 MPs of the Shi’a opposition bloc Al-Wefaq resigned in February 2011, in protest against the authorities’ crackdown on demonstrations that began the same month.

The Shi’a-led protest movement, demanding a constitutional monarchy in Sunni-ruled Bahrain, continues but is confined to Shi’a villages surrounding the capital.

At least 80 people have been killed in Bahrain since the protests first erupted, according to the International Federation for Human Rights.

A national dialogue conference, that brings together government and opposition representatives to end the kingdom’s political impasse, has so far failed to achieve any results since it opened in February this year.

The talks were suspended on 27 June for the summer vacation and will resume on 28 August.