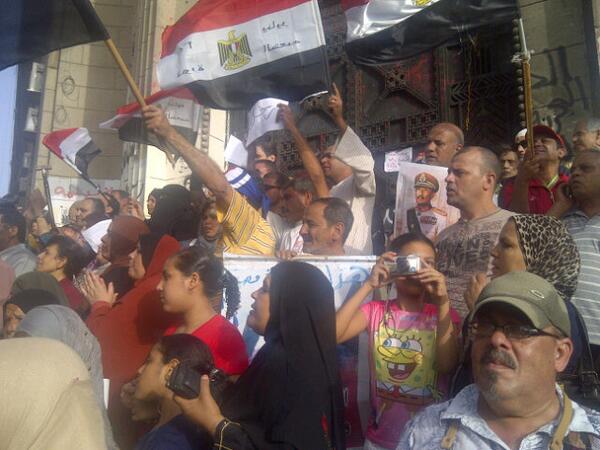 A group of armed men attacked the army while others climbed on top of buildings and threw molotov cocktails, army spokesman Ahmed Ali said in a televised statement on Monday, commenting on the clashes that took place earlier on Monday at the Republican Guard Palace that led to 51 deaths and several hundred injured.

Ali said: “The situation was no longer peaceful.”

Police General Hany Abdellatif stated that what began as rock throwing against the army, turned into gunshots at the army, leading to the death of an army officer and conscript.

Abdellatif said: “[The army] Dealt with and controlled [the situation].”

Ali stated that one soldier is currently undergoing surgery for a gunshot to the head, adding that both birdshot and live rounds were used against the army.

He alleged that protesters were incited to perform acts of violence against the armed forces, and that they were warned several times against attacking or vandalising any military installations.

He added that the army has been present on the streets for 10 days, and that the only thing that could have changed the situation was the actions of the protesters.

In response to pictures of dead children that had spread online, Ali stated that they were pictures of children killed in Syria over a month ago.

“The army kills enemies, not children. This is all a campaign against the army, a form of psychological warfare,” he said, adding that this “informational warfare” was intended to create sectarian strife.

Ali said armed assailants are targeting checkpoints in Sinai, and that the army arrested a car containing 12 armed individuals.

“The army and the police will not allow meddling with Egypt’s national security. Anyone who thinks that they can do something to the security of the nation and its people, I’m warning you,” he said.

“Those in Rabaa and Nahda Square are our brothers. We’re all believers and we’re all Egyptian and we’ll build Egypt together,” Ali continued, stating that no single group or ideology would rule Egypt in the future, and that forgiveness and mercy must be valued, regardless of politics.

Before his address, Al Jazeera journalists were forced to leave, after one person demanded that they not be present, causing a heated debate. The room applauded as the crew finally excited.

Abdellatif said in an effort to calm everyone down, “We believe in the freedom of the media.”

Abdellatif stated that since 28 June the police have confiscated 119 guns of various types and arrested 347 registered convicts. He added that since then, 12 policemen have died and 107 were injured.

He said, “Regardless of [political] intimacies, outlaws will be treated with firmness.”