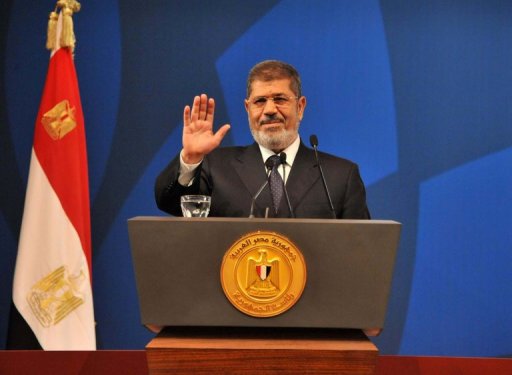 Former president Mohamed Morsi is the one who toppled his own legitimacy, said the National Council for Women (NCW) in a Sunday press release.

“We found it outrageous that some Western media described the biggest demonstrations in history of more than 30 million Egyptians as a coup d’etat,” read the statement.

Morsi’s ousting, according to the NCW, was the result of the military giving power to the Supreme Constitutional Court, and was spurred by the will of the people, which “represents the legitimacy of any democratic country.”

This change in power, pointed out the NCW, was undertaken after Minister of Defence Abdul Fatah Al-Sisi provided a one week deadline followed by a 48-hour deadline to overcome the political crisis, adding that “there was no response from the authority.”

The military’s actions, according to the statement, were made with respect for the majority of Egyptians and in an effort to “avoid civil war that would have occurred due to the [violent] threats…to anti-Morsi protesters from pro-Morsi protesters.”

The NCW said the former president had undermined his own legitimacy by making decisions that were “against democracy and legitimacy,” adding that under his tenure none of the demands of the January 25th Revolution had been met and oversaw a “clear deterioration politically, socially, and economically.”

The women’s group also blamed him for excluding women, Christians, and opposition groups from politics and vital sectors.

The statement also criticised the “lack of transparency and coverage” from Western media, which it claimed ignored the size of anti-Morsi demonstrations and “the effective contribution of Egyptian women who suffered most from this regime.”

“Egyptians clearly refuse their revolution to be entitled ‘a coup d’etat’ ignoring the Egyptians’ demands and will,” concluded the release from the NCW.