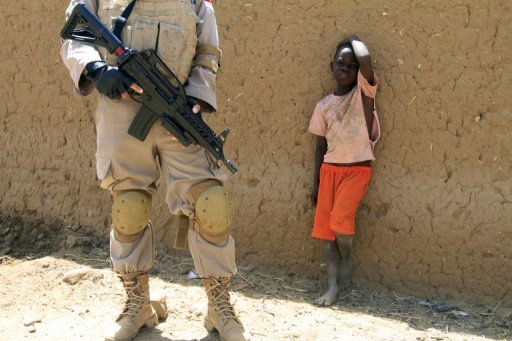 Mashood Baderin, the UN’s independent expert on human rights in Sudan, visited South Darfur’s Otash camp during his latest mission to the country.

“The difficult conditions facing people in the camp, especially women and children, was terrible,” he told a news conference in Khartoum.

“The tents were inadequate and most of the new IDPs (internally displaced people) have resorted to using local materials to construct makeshift shelter.”

They need “immediate help and attention to avoid a humanitarian disaster” as the rainy season nears, Baderin said, adding local officials promised to him they would take action.

More than 4,500 newly-displaced have arrived at Otash in the last six weeks alone, he added.

Other camps near the South Darfur state capital Nyala have also seen more new arrivals as a result of increased tribal violence and government-rebel clashes, he said.

“It is unfortunate that since my last visit there has been an upsurge in the inter- and intra-tribal conflicts, as well as clashes between the armed groups and government forces in the Darfur region, which has resulted in a climate of insecurity and forced displacements,” said Baderin who has made three trips to Sudan in the past year.

He is to report to the UN’s Human Rights Council in September.

Ethnic clashes, and to a lesser degree fighting between government and rebel forces, have forced an estimated 300,000 people in Sudan’s far-west to flee this year.

That is more than in the last two years combined, the UN says, and adds to an existing displaced population of 1.4 million in Darfur.

Foreign envoys and UN officials who met in the North Darfur town of El Fasher this week expressed “grave concern at the deterioration of the security situation,” Mohammed Ibn Chambas, the head of the African Union-UN peacekeeping mission in Darfur (UNAMID), said on Monday.

The envoys held a two-yearly assessment of the situation in Darfur.

Conditions in many camps have deteriorated over the past decade as fewer organisations are able to deliver basic services, OCHA, the UN’s humanitarian agency, said in a late-May report.

“Many of the organisations with experience of managing camps have stopped operating in Darfur, either because of a lack of funding or because of the bureaucratic impediments that make working in the region extremely complicated. As a result, people in many camps are living in desperately poor conditions,” OCHA said on its website.

Rebels in Darfur rose against the Arab-dominated Khartoum regime a decade ago, an insurgency initially met by government-backed Janjaweed militia who carried out atrocities against ethnic Africans.

While the worst of the violence has long passed, instability has been complicated by tribal fighting, kidnappings, carjackings and other crimes, many suspected to be the work of government-linked militia.