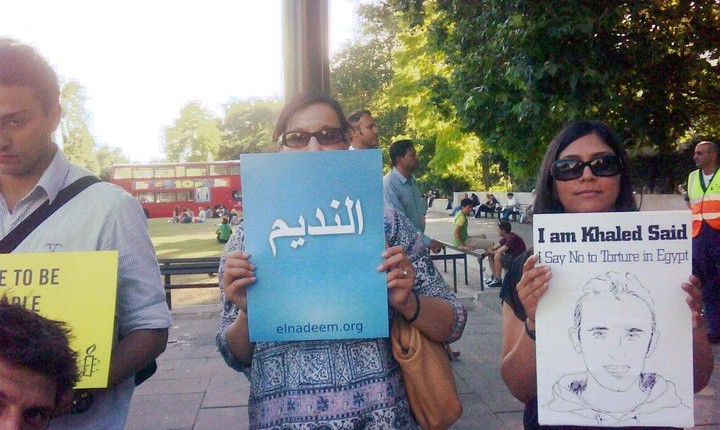 Doctors at El Nadeem Centre for the Rehabilitation of Violence of Victims said Thursday that they would go to the centre’s headquarters on Saturday, despite threats of closure from the state. The doctors said that even if the decision is reinforced after the weekend, they will carry on with their activities.

El Nadeem heads Laila Adly, Aida Seif El-Dawla and Suzan Fayed had said they would remain at the centre headquarters on Wednesday and Thursday.

Entering its second week under pressure of a governmental shutdown, the centre established in 1993, issued Thursday a detailed report regarding its legal situation, in response to reports from the Health and Foreign Affairs ministries.

“On Wednesday the 24 February 2016 the Ministry of Health released a statement, which was published in Shorouk newspaper as well as in English on the Facebook page of the Ministry of Foreign Affairs, which included false information regarding [the centre], despite our visit to [the Health ministry] and our correction of that information. Due to the ministry’s insistence of those false claims, we find it is necessary, again, to correct them to the public,” El Nadeem stated.

The Press Syndicate organised a press conference attended by lawyers, activists, journalists and civil society in solidarity with the centre, which received a warrant for its closure from Cairo governorate authorities stating that the centre had violated the terms of its license, though no further details were provided.

The centre carries out professional health work, related to the rehabilitation of victims of violence and torture in the centre’s clinic, and is classified and registered by the health ministry as a “joint clinic of psychiatry and neurology”.

Ministry spokesman Khaled Megahed stated that the centre violated the terms of its licence by changing its activity from being health related to that of ‘human rights’.

The centre was informed and received a warning to rectify the situation, but no action was taken by El Nadeem before the stated deadline, resulting in the aforementioned decision, according to the health ministry spokesman.

El-Nadeem denied being notified and responded that its institution operates two independent activities, one of them being the clinic named ‘El Nadeem Psychiatric Treatment and Rehabilitation Clinic’ which is licensed by the Doctors’ Syndicate and the Ministry of Health.

El Nadeem presents itself as an independent Egyptian NGO that was established as a civil not for profit company. Its work has mainly focused on victims of torture and violence, including women and refugees.

The centre acknowledges operating through publishing, campaigning and mobilisation of different societal sectors against the practice of torture, which they have reported to be on the rise.

In recent years, their published reports were concerned with victims of torture practiced in security detention facilities, sparking several accusations towards police and other security officers.

El Nadeem blamed the closure decision, of which doctors were informed only when police forces arrived at the centre last Wednesday, on the cabinet’s claims that the order is based on “a report issued by the centre published by El Masry El Youm that addressed torture and oppression of members of terrorist organisations by the police”.

El Nadeem assures that “all reports and training of physicians are carried out through the centre and not the clinic. Both entities have a different location and address. Accordingly, we have not changed the activities of the clinic to those of the centre as claimed by the health ministry”.

The centre said it had previously come under pressure from the ministry in 2004 but avoided closure. However, the ministry claimed otherwise, stating the centre had been “committing legal violations with regards to changing its activity without the appropriate licence”, and so consequently was closed for one month.

El-Nadeem highlighted the restriction of freedoms for citizens in general, and civil society organisations in particular, the foremost of which are human rights organisations in Egypt. Despite previously facing threats, El Nadeem promised to carry on with their work and legal pursuit of their rights.