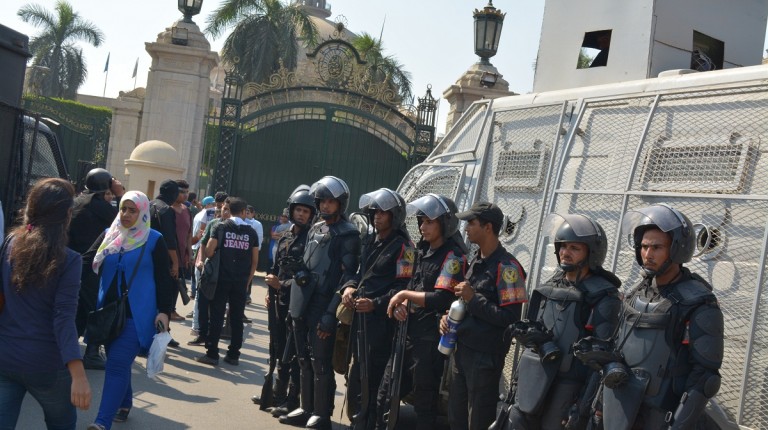 Protests under the slogon “Bring back the students” have taken place in universities across Egypt on Sunday on the second day of classes amid heavy presence of riot-police.

Employees of privately owned security company Falcon retreated from their posts at the main gate, as scores of students gathered outside to enter.

Students Against the Coup (SAC) spokesperson Youssef Saleheen said students clashed with personnel from Falcon, causing them to abandon the doors and retreat to the Cairo University metro station.

Ali Ahmed, a student at the Faculty of Commerce said the presence of riot-police around campuses is a severe violation of academic freedom, which the constitution vows to protect.

Other students made complaints of having been forced off the campus, in fear of a security break in.

Although confrontations did not take place between students and police, groups of students chanted “We want to get in” as they tried to storm the campus’s main gate.

Police conscripts in civilian clothes were spread around the groups of students and asked journalists for identification cards.

At Al-Azhar University, six students were arrested as they clashed with security forces, said Saleheen.

Students also clashed with personnel from Falcon, destroyed their equipment and X-ray scanners.

This latest wave of protests comes after more than 40 students were reported arrested by state security forces.

According to the Association for Freedom of Thought and Expression (AFTE), security forces launched a campaign of extensive detentions early Saturday.

Security forces carried out dawn-raids on Saturday, the first day of classes, at the homes of several Students Against the Coup members and arrested them.

SAC stated that Saturday witnessed the arrest of at least 52 students across the country. Freedom for the Brave, an initiative that provides support for detainees and their families, said on Sunday that security forces arrested up to 64 students from 18 different universities.

“The movement ensures that such acts will not stop the students’ revolution or weaken it,” the statement read.

Hazem Tarek and Ibrahim Gamal, both previous spokespersons for SAC, are amongst students security forces arrested from their homes.

“Today when we decided to go forward with revolutionary action, we were sure that there was a price to be paid but we were ready to pay it for the sake of putting an end to military rule, retrieving our freedom, and attaining justice for our martyrs,” the statement continued.

“This [detention] campaign comes in anticipation of any student activities planned on the first day of the classes,” the AFTE statement read.

The Egyptian Ministry of Higher Education allowed 15 universities across the country to sign contracts with a security company Falcon. According to El-Marsad El-Araby for Rights and Freedoms, the company is run by a former military intelligence officer and is provides support for a Ministry of Interior presence on campuses.

Students made complaints regarding the slow process of investigations at the gates, and said the company has created traffic, leaving many people late for their classes.

Al-Tayyar Al-Shaabi (Popular Current) also released a statement Sunday condemning the intensity of the security measures and warning of their “consequences”.

The 94 students were expelled without their knowledge.

Over the past academic year, at least 16 students were killed inside their campuses while hundreds were arrested, according to AFTE.