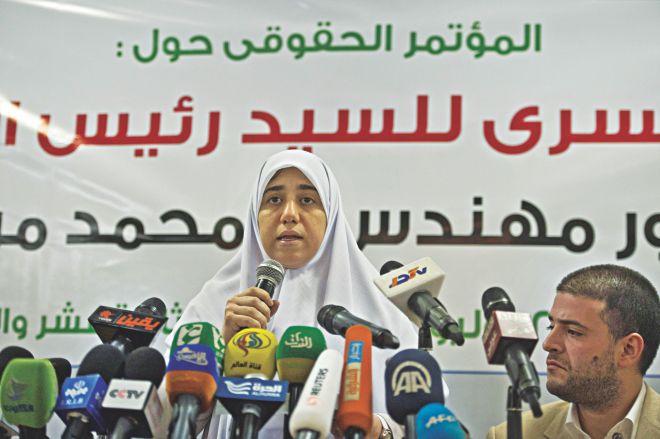 The Board of State Commissioners at the Administrative Court issued a report Monday recommending the cancelation of Minister of Interior Mohamed Ibrahim’s decision to allow Ahmed and Al-Shaimaa Mohamed Morsi dual Egyptian and American nationalities, state-owned Al-Ahram reported.

Ibrahim had issued the decision during the government of former president Mohamed Morsi on 25 May 2013.

Lawyer Mohamed Salem filed a lawsuit demanding that Egyptian nationality be revoked from Ahmed and Al-Shaimaa before the presidential elections.

Egyptian nationality laws state that a minor who gains a country’s nationality by birth can keep it until turning 21 years old. The law gives the citizen a one-year permission to declare willingness to maintain Egyptian citizenship or withdraw it.

However, Ahmed and Al-Shaimaa did not declare their position on Egyptian citizenship during the required timeframe, so according to law, the Minister of Interior should address the cabinet on whether or not they should be allowed to keep their citizenship.

The report by the State of Commissioners says that Ibrahim invaded the authority of the cabinet in such a way that his decision should be cancelled.

According to the report, the cabinet will make its decision in the context of whether or not these dual citizenships constituted a threat national security.

The report added that the acquisition of a foreign nationality without informing the Egyptian authorities is disrespectful to the laws and authorities of Egypt, and the unwillingness to keep the Egyptian citizenship renders the accused “undeserving” of it.

The lawsuit is comparable to the case wherein leading Islamist Hazem Abu Ismail was referred to criminal court for failing to disclose his mother’s dual citizenship prior to submitting his nomination to the presidential elections.