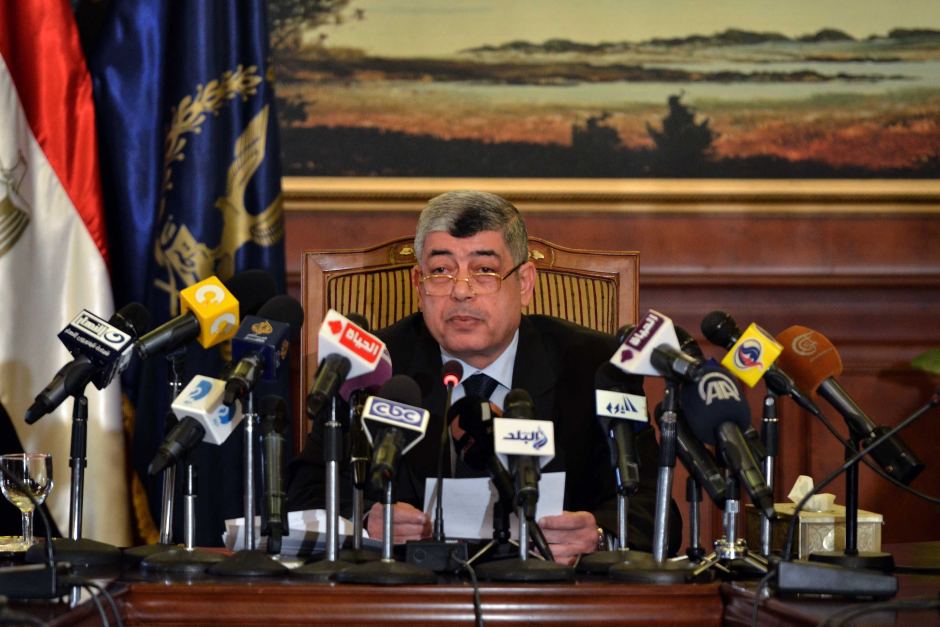 The new sit-in assembled in Mustafa Mahmoud Square in Mohandessin in support of ousted President Mohamed Morsi will be “dealt with”, according to Minister of Interior Mohamed Ibrahim.

The Al-Nahda Square pro-Morsi sit-in in Giza was forcibly dispersed early Wednesday; protesters then moved to Mustafa Mahmoud Square in Mohandessin and set-up a new sit-in amid clashes with Central Security Forces.

In a press conference held Wednesday night to provide fan account of the security forces’ activities in the dispersal of the Al-Nahda and Rabaa Al-Adaweya sit-ins, Ibrahim said  the ministry would not allow further sit-ins.

“There will be a plan,” Ibrahim said. “Weapons will be faced with weapons. We will not exercise self-restraint as we did today.”

Ibrahim said he gave clear directions to security forces not to use “any weapons” during the dispersal; that teargas was only to be used after warnings were given, and that safe exit be offered to protesters.

“Security forces dealt with the dispersal of Al-Nahda sit-in with an extreme level of professionalism which led to no losses,” Ibrahim said.

He added that security forces were nevertheless “surprised” to find that some protesters took shelter and began firing weapons at security forces, whom he said exercised the highest levels of self-restraint.

“Protesters were betting on a large death toll to result from the dispersal,” Ibrahim said. “When the Al-Nahda sit-in was dispersed without deaths, they began attacking us.”

Ibrahim said “terrorist” elements at the Rabaa sit-in climbed the rooftops of tall buildings to fire on security forces.

“I gave directions for the forces to be patient and to elongate the period of surrounding them,” Ibrahim said. He added that special forces were able to arrest those firing at the security and confiscate their weapons.

During the sit-ins dispersal, Ibrahim said “Muslim Brotherhood elements” ordered supporters to attack police, and state and religious institutions to “cause a state of havoc”. He added that some of the assailants possessed heavy weaponry and were  able to attack into police stations, 21 of which were broken into..

Seven churches were also attacked and 14 money transfer vehicles were stolen, the minister said. He added that both the Ministry of Finance and the Ismailia court complex were broken into and sabotaged.

Forty two members of the security forces were killed, Ibrahim said, describing them as “heroic policemen”. The “Martyrs included 17 officers, 15 policemen, nine conscripts and one administrative employee. He added that 211 security forces were injured, many of whom were in critical condition.

Ibrahim said: “149 rioters died in all governorates, as per the Ministry of Health’s death toll,” claiming that in comparison with the number of protesters at the sit-ins, which he estimated to be 15,000, this showed restraint. He claimed that international standards put the expected death toll of dispersing “non-peaceful” sit-ins at 10%.

The Ministry of Health updated the death toll to 525 on Thursday, while the Muslim Brotherhood claims at least 2000 people died.

Ibrahim denied that Muslim Brotherhood leaders were among those arrested following the sit-ins’ dispersal. He added he had no information about the whereabouts of Brotherhood supreme guide Mohamed Badei.

“We endured accusations of being passive or shaky,” Ibrahim said. “We only postponed the dispersal to give political solutions their full chance and to avoid the bloodshed of countrymen.”

He stated that when they sensed obstinacy and incitement from the protesters, a decision had to be made and thus a date for the dispersal was scheduled. “All media outlets and human rights organisations were invited to observe the sit-ins dispersal,” Ibrahim said.

Last week, Prime Minister Hazem Al-Beblawi said the decision to disperse the pro-Morsi sit-ins was a “final” one and called on protesters to evacuate the sit-ins.