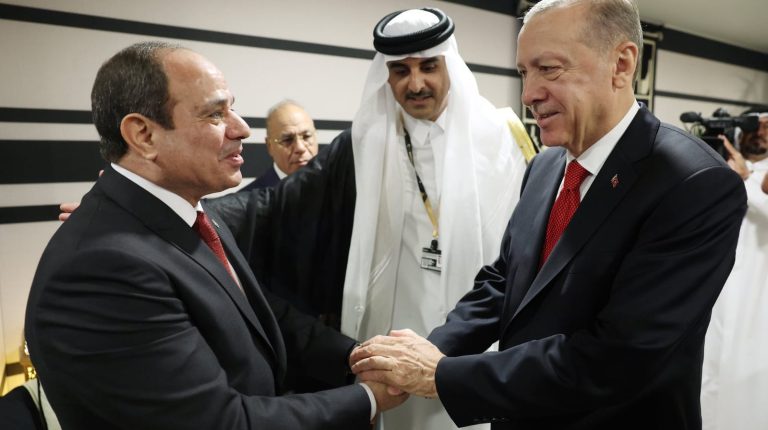 Cavusoglu told reporters in Ankara that the two countries may resume diplomatic consultations led by deputy foreign ministers as part of the normalisation process “soon”.

After years of strained relations, Egyptian President Abdel Fattah Al-Sisi shook hands with his Turkish counterpart Recep Tayyip Erdogan during the opening ceremony of the 2022 FIFA World Cup in Qatar last week in what several media outlets described as a new beginning in bilateral relations.

Turkish and Egyptian intelligence officials held talks after a meeting between Al-Sisi and Erdogan in Doha, Qatar, Turkish sources told Reuters on Monday.

Turkish President Erdogan said Sunday that the process of building ties with Egypt will begin with a meeting of ministers from the two countries and talks will evolve accordingly.

In a TV talk show recorded in Konya province on Saturday, Erdogan said he spoke with Al-Sisi for 30 to 45 minutes in that meeting on the sidelines of the World Cup in Qatar.

“We focused on talks with President Al-Sisi and said now let’s exchange visits of low-level ministers. Next, let’s broaden the scope of these talks,” he said, also hinting at the possibility of improving relations with Syria.

“Things can return to normal with Syria in the next stage, as happened with Egypt,” he said.

The official spokesperson of the Egyptian presidency, Bassam Radi, said that during their recent meeting in Qatar, Al-Sisi and Erdogan stressed the depth of historical ties between the two states and peoples.

“It was agreed that this will be the beginning of the development of bilateral relations between the two sides,” he said in a previous statement.