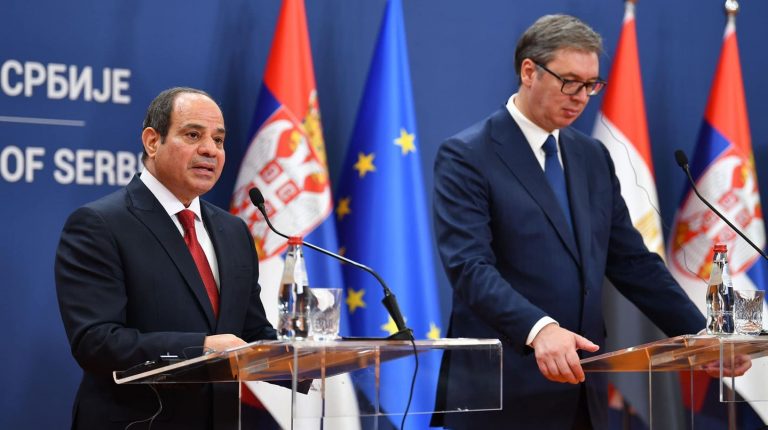 President Abdel Fattah Al-Sisi has said that his meeting with Serbian President Aleksandar Vučić marked the culmination of joint efforts over the past period to advance cooperation between the two countries.

During a joint press conference on Wednesday in Beograd, Al-Sisi emphasized Egypt’s aspiration to strengthen relations with Serbia in all fields, in light of the rich historical relations that bind the two countries since 1908.

“We share a common vision towards various topics and areas of cooperation,” said Al-Sisi, noting that this visit will pave the way for a new phase of partnership between the two countries.

The two countries will work on increasing bilateral cooperation in the fields of investment, trade exchange, agriculture, tourism, communications, and information technology.

The Egyptian president said that they exchanged views on various topics and issues of common interest, on top of which are the current developments in the Middle East, the Palestinian cause, and the Libya crisis.

In this regard, Al-Sisi said that the Egyptian position is based on reaching a peaceful solution to the conflict and making all efforts to achieve this, whether at the bilateral, regional, or international level. He called for feasible solutions that spare the peoples the negative effects of the Russian-Ukrainian crisis.

Both leaders also reviewed the Egyptian initiative to form a ministerial contact group within the framework of the Arab League, which last April visited Moscow and Warsaw to meet with foreign ministers to urge all parties to calm down, and to give priority to the dialogue and negotiation, in order to reach a settlement, to avoid the scourge of war and its dire economic effects.

The discussions also dealt with Egypt’s efforts to mobilize the international community to combat climate change, which was reflected in Egypt’s keenness to host the UN Climate Summit (COP27) next November in Sharm El-Sheikh. Al-Sisi invited his Serbian counterpart to participate in the summit.