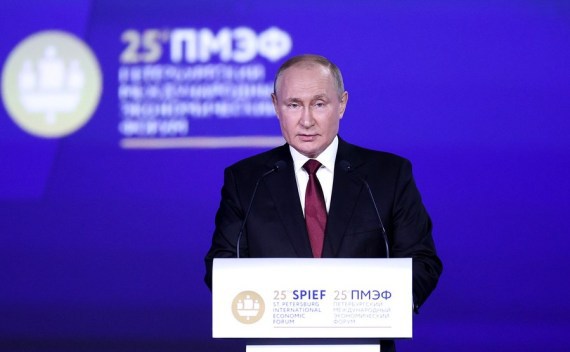 At the plenary session of the forum, Putin recalled that the surge in commodity and raw material prices occurred long before the Russia-Ukraine conflict, underlining that the current situation has nothing to do with Russia but was caused by “many years of irresponsible macroeconomic policies” of the Group of Seven.

In Putin’s view, some Western countries consider the Russian operation in Ukraine as “a lifeline that allows them to blame others for their own miscalculations.”

Speaking about the future of the Russian economy, Putin said his country will never follow the path of self-isolation and autarky.

Putin announced cheap loans to boost industrial production, set the task of mastering all the critical technologies for manufacturing key products, and asked the government to make new fiscal rules to fortify the foundation of economic growth.

The Russian leader said some Western countries with “outdated geopolitical illusions” intentionally undermine the principles of the global economic system.

As a result, many trade, production and logistics ties that were previously disrupted by the COVID-19 pandemic are now going through new tests, he told the audience.

Putin said there are revolutionary changes in geopolitics, the global economy, the technological sphere and the entire system of international relations, but some Western countries are trying to counteract this inexorable course of history.

As for the global food shortage, Putin believed that the most important task for the entire world now is to increase the supply of food to the global market, including to countries that are desperately in need.

Russia, while ensuring its own food security, is able to raise the export of food and fertilizers, he noted, pledging readiness to contribute to balancing the world food market.

Russia has not been hampering Ukraine’s food exports, Putin underscored.

In his view, the “economic blitzkrieg” against Russia has failed and the Western sanctions have been proven to be a double-edged weapon as the European Union (EU) and European companies could suffer huge direct losses from the sanctions.

Putin said that Russia does not object to Ukraine joining the EU as it is not a military bloc.

Putin called it a “forced and necessary” decision for Russia to conduct the special military operation in Ukraine against the backdrop of “growing risks and threats to us.”

“Sooner or later, the situation (regarding Ukraine) will normalize,” he said, stressing Russia is not threatening anyone with nuclear arms.

Also attending the event, Kazakh President Kassym-Jomart Tokayev said “We are convinced that building a peaceful, stable and economically strong Eurasia will be a powerful factor in sustainable development and inclusive growth on a global scale.”

Tokayev called for measures to realize the full potential of cooperation within the framework of the Eurasian Economic Union and pair the Eurasian integration process with China’s Belt and Road Initiative.

Egyptian President Abdel-Fattah Al-Sisi said in a video message that he hopes the outcome of the forum will facilitate the search for effective solutions to existing problems and reduce the negative impact of the global economic crisis.

It is necessary to take into account the concerns and interests of all countries, ensuring the security and well-being of peoples, and promoting long-term mutual understanding on political issues, he added.