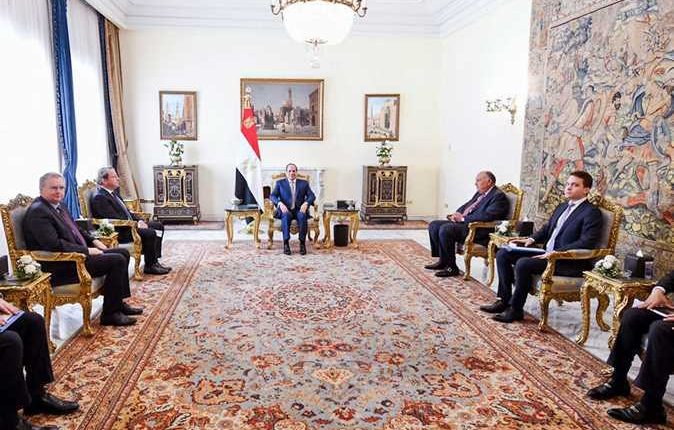 Bassam Radi, the presidential spokesperson, said that Al-Sisi stressed the important role of the EU and its institutions within the framework of the Egyptian policy, which is based on mutual respect and cooperation, as Europe is the top trading partner of Egypt

President Al-Sisi also stressed the complex ties between the two sides and the common challenges they face on both sides of the Mediterranean, as well as the EU’s involvement in the development process taking place in various sectors in Egypt.

On his part, Várhelyi praised the distinguished historical relations between the EU and Egypt.

He stressed the interest of the European side to develop and deepen the traditional partnership with Egypt in view of the participation of the two sides in the Mediterranean region, in light of the political weight enjoyed by Egypt internationally and regionally, and being the link between the Arab and European worlds, and the axis of maintaining security and stability in the Middle East and the African continent.

The meeting discussed the various aspects of the relationship between Egypt and the EU, both with regard to its political, economic and development dimensions, where satisfaction was expressed with the overall developments witnessed by the institutional cooperation between the two sides.

The meeting also touched on the developments of international and regional issues, foremost of which were the Russian-Ukrainian crisis and its economic repercussions at the global level, especially in the fields of energy and food.

They also exchanged views on the Palestinian issue and ways of joint coordination in the coming period between Egypt and the EU towards efforts to improve living and service conditions in the Gaza Strip, in line with the Egyptian Initiative for Gaza reconstruction.

As for Libya, Al-Sisi stressed the importance of ending the presence of armed militias and extremist groups inside Libya, which undermine the chances of achieving stability and peace.

Várhelyi praised Egypt’s efforts in the field of combating illegal migration, stressing the EU’s appreciation for these efforts and stopping cases of illegal migration from Egypt since 2016, especially as Egypt hosts more than 6 million refugees of different nationalities enjoying all basic rights, which is a successful model in the region in this regard.

During the meeting, the issue of the Grand Ethiopian Renaissance Dam (GERD) was also discussed. The President stressed the importance of this existential issue for Egypt and its people, stressing Egypt’s firm position in reaching a legally binding agreement on the rules for filling and operating the dam in accordance with the relevant international law.

Earlier on Wednesday, Foreign Minister Shoukry met with Várhelyi to strengthen the close partnership between Egypt and the EU.

Minister Shoukry stressed the aspiration of Egypt to strengthen the partnership with the EU in a way that achieves mutual benefit for both sides, expressing his aspiration to convene the participation Council between Egypt and the EU to approve the document of priorities for participation for the years 2021-2027 soon.

He pointed out the importance of this document to constitute a qualitative transfer in the institutional cooperation between the two sides according to their common priorities and in many fields, including agriculture, irrigation, industry, artificial intelligence, green transformation, digitization and smart mobility.

Minister Shoukry also stressed the importance of continuing cooperation to deal with the repercussions of the Ukrainian crisis in Egypt, especially with regard to food security, especially through supporting projects related to agriculture, the development of agricultural technology and other long-term proposals.

He pointed to the importance of strengthening cooperation between Egypt and the EU in the field of energy, especially natural gas, liquefied gas, electricity and green hydrogen production in preparation for the export of energy surpluses to Europe.

Shoukry also reviewed the preparations and ongoing efforts to host and chair Egypt for the 27th session of the conference of the parties to the United Nations Framework Convention on climate change (COP27), and the importance of cooperation between Egypt and the EU for the success of the conference.

Minister Shoukry and the European commissioner discussed a number of international and regional issues of mutual interest; they agreed on the importance of continuing to strengthen the current momentum in relations between the two sides and maintain the pace of coordination and consultation at various levels.