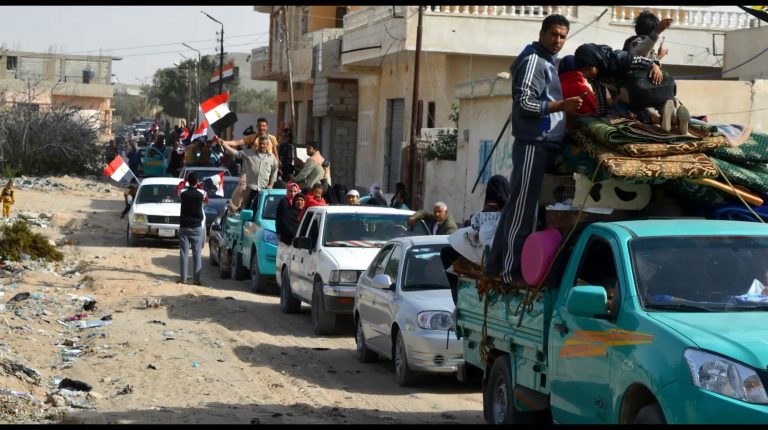 Villagers from the town of Sheikh Zuweid in North Sinai governorate, east of Cairo, have returned to their homes after terrorism there was eradicated.

Terrorist groups spread in Egypt after the June 30 protests in 2013, especially in North Sinai, which forced many locals to flee.

Egypt has been fighting against the terrorist groups that killed hundreds of policemen, soldiers, and civilians in North Sinai. More than 1000 terrorists have been killed in the military crackdown over the past seven years.

Fierce battles between the two sides caused the displacement of the villagers in the towns of Rafah and Sheikh Zuweid, especially after their homes and farms were destroyed during the battles.

With the success of defeating the terrorist groups, the government allowed the residents to return to their home villages.

Sheikh Arafat Khader, tribal leader of Sheikh Zuweid, said that the residents have returned to the villages located in the south of the town, such as Abu Rafai, Al Dhaher, Abu Al-Araj and Abu Faraj, which is the gateway and entrance to Sheikh Zuweid.

However, some residents have not returned yet due to the security operations that the armed forces are still carrying out in these villages against the remnants of terrorist groups.

Abdel-Latif Zammat, a resident of Sheikh Zuweid, said that people returned with great joy, despite the destruction of their homes and farms.

“Families erected tents next to their demolished houses until they are rebuilt,” Zammat told Xinhua.

Hussein Eid, another resident of Sheikh Zuweid, lamented that villagers, who were forced to leave their hometown seven years ago, were living a difficult life in Ismailia or Bir al-Abed, north of Cairo.

“Fearing the explosions, the IS kidnapping, and intimidation, we left our homes and settled in other areas,” Eid, who found his home totally destroyed, told Xinhua.

Eid built a small tent for his family, next to his demolished home, while waiting for the government to pay for the reconstruction as promised.

Salman Salim, 38, who returned to his village west of Sheikh Zuweid after years of displacement, faced the same difficulties.
“We tried to live under terrorism to avoid displacement, but we could not. Death was crawling around us from every direction because of the war. My family and I fled with light luggage and left the furniture of the house,” Salim told Xinhua.

He added that they went to a village in the nearby city of Bir al-Abed, leading a miserable life for seven years.
“When we returned after the villages is purified from terrorism, we did not find our homes as they were. I found my house in ruins,” Salim said sadly.

The good news is, Mohamed Abdel-Fadil Shousha, governor of North Sinai, recently visited the villages, reassuring people that their demands and all the needs of services and facilities would be met.

He said that compensations will be paid to house owners for partially and completely destroyed homes, adding that more residents are returning to the rest of the villages in the area.