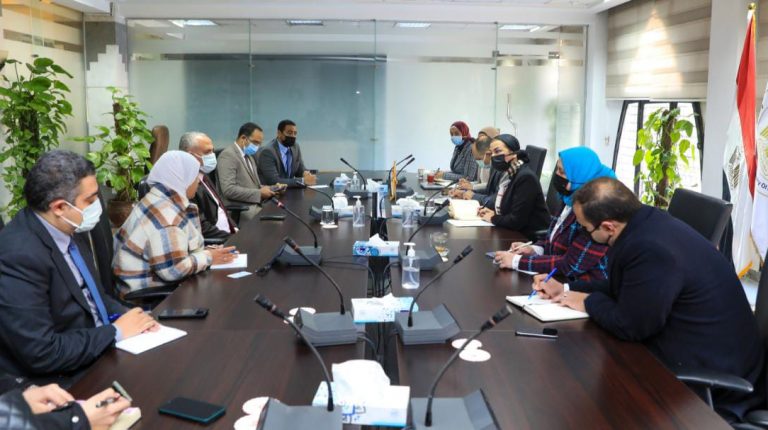 Minister of Environment Yasmine Fouad and Minister of Water Resources and Irrigation Mohamed Abdel Atty held an extensive meeting to discuss the preparations for holding the Conference of Parties on Climate Change (COP 27) and the Water Pavilion, which will be held on the sidelines of the COP 27 in November.

The meeting addressed the mechanism of including water issues in the various activities of the conference in the presence of a number of leaders of the two ministries.

Fouad emphasised the importance of water issues and their relationship to climate change on the agenda of the COP 27 and that it should be addressed in the upcoming climate negotiations given its importance to many countries of the world.

The environment minister explained that it is necessary to work on forming a joint working group from the Ministries of Environment, Water Resources and Irrigation, and Foreign Affairs to agree on water-related issues that will be addressed during the conference and to define a package of adaptation projects that the country wishes to obtain funding for.

She further noted that Egypt aims through the upcoming climate conference to work on increasing the financing provided by developed countries, adding that four workshops will be implemented for the Global Adaptation Programme. Two will be held this year — one of which will be held in Egypt — and the other two will be held next year.

Fouad added that a package of adaptation projects will be identified in the fields of water resources and beach protection, and a number of important water-related initiatives will be identified to be launched at the conference that must represent real success stories.

These initiatives should take into account geographical division and have an added value in climate issues as well as include different partners between developing and developed countries, research bodies, international organisations, and civil society organisations in coordination with the Ministry of Foreign Affairs.

Minister of Irrigation Abdel Atty affirmed the interest of many countries and regional and international organisations to participate in the Water Pavilion, adding that there are many projects and procedures that the ministry is currently implementing that can be presented during the event that will be held on the side-lines of the COP 27.