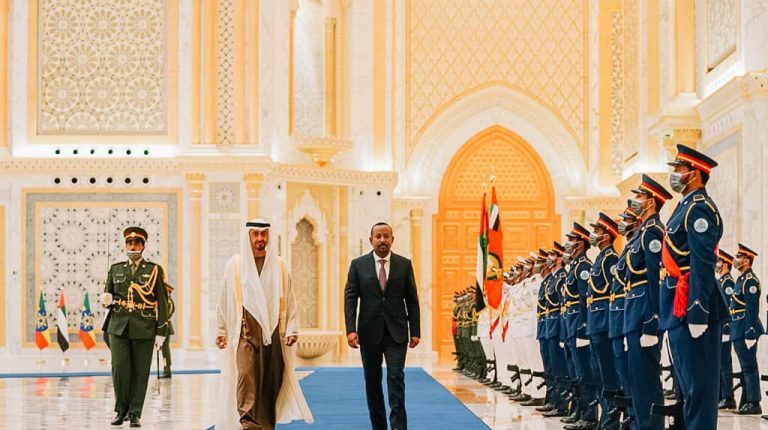 Ethiopian Prime Minister Abiy Ahmed arrived on Saturday to the United Arab Emirates’ (UAE) capital of Abu Dhabi on an official visit to the UAE, where he was received by Crown Prince of Abu Dhabi Sheik Mohammed bin Zayed Al-Nahyan.

The two sides discussed “the paths of cooperation and joint action and the opportunities to strengthen them between the UAE and Ethiopia in various fields in order to serve the overall development efforts in both countries and their mutual interests, in addition to all regional and international issues of common concern,” reported WAM News Agency.

Bin Zayed welcomed the Ethiopian Prime Minister’s visit to the country, expressing his pride in the constructive relations of friendship that the UAE and Ethiopia have fostered over the past years through sincere work for the benefit of their peoples and the security and stability of the region.

The two sides also exchanged views on the latest regional and international developments and a number of issues of common concern, particularly the peace efforts in the Horn of Africa.

The Ethiopian Prime Minister’s visit to Abu Dhabi carries with it special significance through the solidarity and strong condemnation of the Houthi terrorist attacks announced by the Ethiopian Foreign Ministry.

Ethiopia has expressed its full solidarity with the United Arab Emirates in all actions taken to safeguard the security and safety of its citizens and the sovereignty of its territory.

“Since Abiy Ahmed assumed the Ethiopian premiership in April 2018, UAE-Ethiopia relations have been developing in various fields, especially in the economy and the flow of UAE investments.”

For his part, Ahmed praised the UAE’s approach in its relations with countries, which are based on wise and balanced diplomacy that seeks to establish stability and peace in all countries of the world.

He reiterated Ethiopia’s solidarity with the UAE in all the steps it takes to maintain its security and territorial integrity, stressing that the terrorist attack constitutes a serious threat to regional security and peace, undermines peace efforts in the region, and violates all international and humanitarian norms and laws.

Crown Prince Bin Zayed Al-Nahyan received last Wednesday Egyptian President Abdel Fattah Al-Sisi and pledged to continue to work against regional interventions and attempts to sow division between the countries of the region.

The meeting also touched on the developments taking place in regional and international issues of common concern.