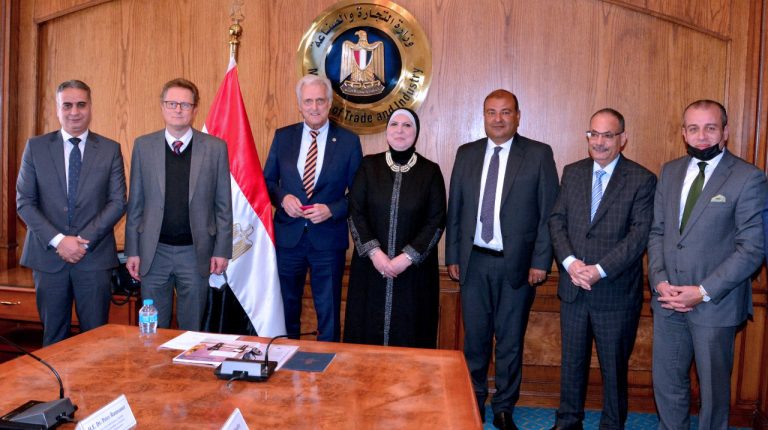 Minister of Trade and Industry Nevine Gamea has held an extensive meeting with Peter Ramsauer, the President of the German-Arab Chamber of Industry and Commerce (GACIC), on ways to develop the Egyptian-German economic relations in various commercial, industrial, and investment sectors, in addition to the renewable energy sector.

The minister stressed the Egyptian state’s keenness on strengthening bilateral relations between Cairo and Berlin in various fields, especially that Germany is one of Egypt’s most important economic partners in the European Union.

She pointed out that the political leadership is paying attention to expanding economic cooperation frameworks with Germany to benefit from its advanced industrial expertise and transfer it to the national industry in various industrial sectors.

Gamea pointed out that the meeting included discussing an Egyptian-German joint economic committee during the second half of next June in Berlin. She highlighted the possibility of setting up a forum for businessmen in Egypt and Germany to review opportunities for joint investment cooperation between the two countries, especially that Germany will host the activities of the Arab-German Business Forum to be held on 21-23 June.

This represents a distinguished opportunity to present the projects and investment opportunities available in Egypt in various sectors to business circles in Arab countries as well as Germany.

The minister also expressed the Egyptian government’s hope to cooperate with Germany in the field of renewable energy, as it seeks to benefit from the great German expertise to provide alternatives to traditional energy sources and preserve the environment; especially with regard to the production of green hydrogen, which requires solar energy to be produced, which is available in Egypt throughout the year.

She pointed out that the talks also tackled the ministry’s keenness on benefitting from the great development in the German automobile industry and attracting German investments to the Egyptian market, whether in the automobile industry or industries feeding it.

Gamea noted that it is essential to create coordination between the GACIC and the Egyptian Commercial Service in Berlin to promote in Germany promising investment opportunities in the Suez Canal Economic Zone. The minister added that the regulations for the zone have been amended to allow factories operating in the zone to export to the local market.

For his part, Ramsauer stressed that Egypt is viewed by Germany as one of the pivotal countries in the Middle East. He pointed out that the current stage is witnessing an unprecedented momentum in terms of mutual visits between officials, businessmen, and representatives of business organisations in the two countries. This reflects the depth and importance of the bilateral relations between the two countries.

He also affirmed his keenness to exert more efforts to develop Egyptian-German relations and turn them into concrete cooperation projects that are in the interest of both sides.

Furthermore, Ramsauer highlighted the interest of major German companies working in the fields of investment and trade and cooperating with the Egyptian side, pointing out that the chamber will encourage more German companies to be present in the Egyptian market with the aim of creating new job opportunities.

Frank Hartmann, the new German Ambassador in Cairo, stressed the important role of the chamber in deepening the economic relations between the two countries, pointing out that next year will witness the celebration of the 70th anniversary of the start of official Egyptian-German relations.

He also pointed out the importance of joint work between the two countries in the field of green hydrogen production, noting that several German companies have already started cooperation with Egypt in this regard.