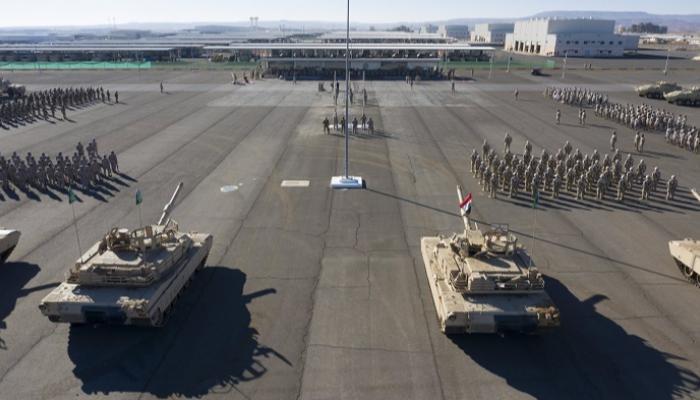 The ‘Tabuk-5’ military drills that include Egyptian and Saudi armed forces are still ongoing in the Kingdom of Saudi Arabia,

The training session aims to achieve the maximum possible benefit for the units involved in planning, management, and implementation, as well as supporting the pillars of cooperation between the Egyptian and Saudi armed forces.

Units of the special forces, armoured personnel, and support elements of various specialised weaponry from both sides participated in the training.

The past days witnessed the preliminary stages of training, which included many theoretical lectures to unify training concepts, coordinate efforts, achieve integration, and foster familiarity between the participating forces of both sides.

The training then moved on to reconnaissance and defending areas, repelling and destroying the enemy by using the ‘Miles’ shooting systems and imitations to achieve realism in training and assess the level of participating elements.

During the drills, the high level of the forces and the extent to which their understanding and combat skills were demonstrated.

The special forces of both countries also carried out intensive training activities that included the implementation of several typical and atypical shootings, as well as training on storming and evacuating scenarios, as well as carrying out ambushes and raids on hostile targets.

Paratrooper forces also carried out drills on preparing and loading personnel and dealing with emergency situations that one could be exposed to while skydiving from high altitudes. They also executed several joint jumps that showed the extent of the flexibility and high skill of the participating elements.

To confront the fifth-generation wars, many theoretical lectures were held, including a lecture on cyber security that covered electronic attacks and the best methods to address them.