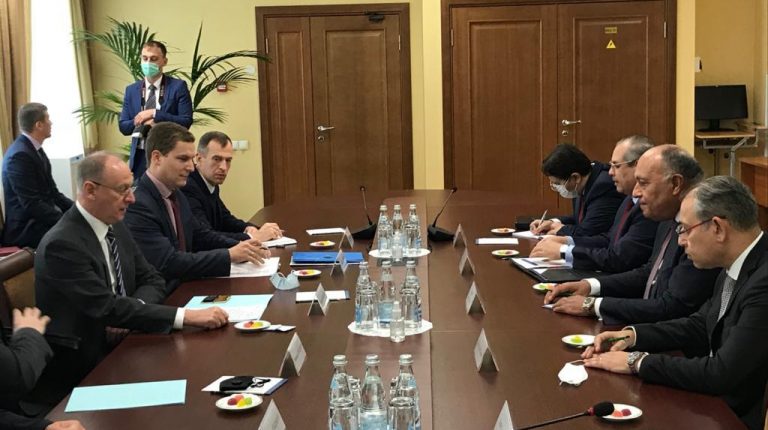 Egypt’s Foreign Minister Sameh Shoukry met Tuesday with Secretary of the Russian Security Council Nikolai Patrushev in Moscow, where they discussed ways to advance bilateral cooperation, as well as international and regional issues of common concern.

Ahmed Hafez, the spokesperson for the Ministry of Foreign Affairs, stated that Minister Shoukry praised the great momentum of the Egyptian-Russian relations in all sectors.

He stressed the importance of maintaining the pace of development witnessed by all aspects of bilateral relations between the two countries during the current stage, as well as the importance of continuing to intensify political consultation and continuous coordination between them.

Shoukry expressed his appreciation for the Russian side’s decision to resume regular air traffic to Sharm El-Sheikh and Hurghada airports.

The meeting also dealt with a number of international and regional files of common interest, especially the situation in Libya.

Minister Shoukry stressed Egypt’s support for the political roadmap approved by the Libyans, the importance of holding the presidential and parliamentary elections on their scheduled dates, and the need for all foreign forces and any foreign presence to leave Libyan territory.

The meeting also dealt with the developments of the Palestinian cause and Egypt’s continuous efforts to revive the peace track, and its current efforts in support of the requirements of reconstruction and development in the Palestinian territories.

The two officials also discussed the latest developments in Syria, and efforts to end the crisis there so that Syria regains its place and role in the Arab ranks.

The two sides also discussed recent developments on the Afghan scene, as well as all issues that represent a challenge at the regional and international levels.

At the conclusion of the talks, the two sides agreed on the importance of continuing consultations between the two countries in light of the joint Egyptian and Russian desire to coordinate positions on regional and international issues.